New Names for the New Normal:
No Longer ‘Astonished’ by the ‘Big One’ 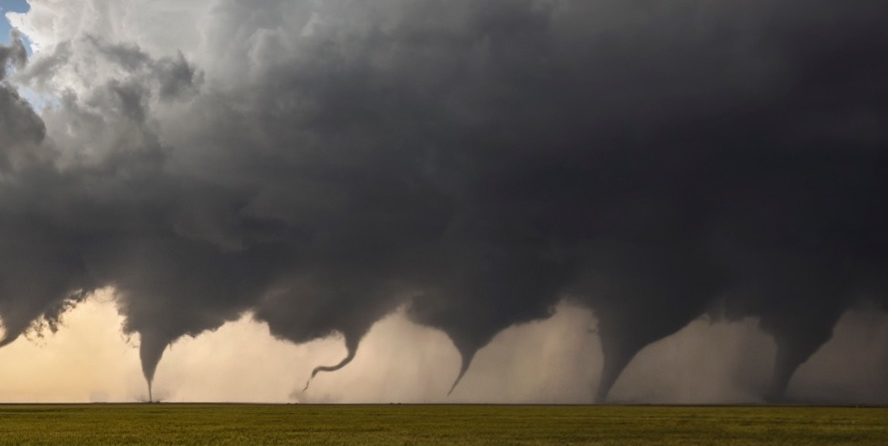 A tornado’s growth, a 2016 sequenced image of a storm in Minneola, Kansas.
Image by Jason Weingart. Source: Wikimedia

Last year, the U.S. National Football League (NFL) expanded their regular season schedule from sixteen games per team to seventeen. All athletic records prior to this point were on the old timetable but, when in game #17 this January T.J. Watt tied the single-season sack record, Justin Hebert broke the rookie touchdown-pass mark, and Tom Brady recorded the most passing yards ever in a season, the press went wild.

Is it reasonable to gush over those milestones when they could only have been achieved after conditions had changed? Failing to contextualize updated conditions when recounting events makes occurrences appear greater than they are. For football, that simply inflates the accomplishments of a few players – no harm done. But with climate change, it makes permanent conditions seem like they’re still anomalies. The old vernacular when a devastating hurricane hit does not fit when every season brings ‘the big one.’

“Astonishing” tornado and wind records were “a December day to remember,” howled the Omaha World Herald’s headline in the aftermath of last December’s Midwestern tornado-fest. Yes, those tornadoes were numerous, severe, off-season, longer lasting, and traveled farther than was normal in the past, and that lends itself to hyperbole. But using such language in reporting suggests that what science recognizes as the new normal is really nothing more than, to quote Lemony Snicket,[1] a series of unfortunate events.

It is this mentality which led a New South Wales news outlet to ask plaintively, “what is a 1-in-100-year weather event? And why do they keep happening so often?”

The first question is simple: a hundred-year event is one that has a 1% (or 0.01) chance of happening in any specific place in a given year, just as a thousand-year event has a 0.1% (0.001) chance. But the real question is, if they are happening so often, why is hyperbolic language still being used suggesting such events are unusual? This false reality gets in the way of a meaningful, systemic response to permanent change. Will anyone remember those tornadoes in five years? In ten?

Climate-related changes can also reinforce each other, turning things from isolated issues into resonating risks and then concordant crises. Consider western Canada’s experience in just the last 12 months: in the summer of 2021, temperatures as high as 121˚F (49.4˚C) broke records. There were droughts and wildfires, and fire consumed a whole town. Then, in November, the town of Hope got almost a foot of rain (11.6 in or 29.5 cm) in just over two days – more than it normally gets in the entire month.

As The New York Times reported, “Experts said that events in this sequence – heat, fire, drought, flood – could produce so-called compound effects. A drought can dry out vegetation, which in turn can fuel and intensify fires. Fire itself can weaken or kill plants and make the soil less permeable, meaning that rain is more likely to run off rather than soak in, causing flash floods and landslides.”

An earthquake led to a landslide in El Salvador in January, 2001
Photo by U.S. Geological Survey

Indeed, in November, flooding, landslides, mudslides, and other issues “destroyed vital infrastructure and left freight to pile up at Vancouver’s port, Canada’s gateway to Asia.”

As one climate analyst noted, “Climate change can reveal itself both as a change in the probability of occurrence of specific extreme events – what was extreme becomes the new normal – and as the occurrence of new, unprecedented events, which I would call dangerous climatic surprises.”

This is an example of what Valutus calls submerged risk, and risks to the business beyond a company’s own operations. Imagine a company whose facilities were untouched by heat, fires, drought, and floods, and whose production was completely unaffected. Does that mean they’re safe from climate-related disruptions? Not if their goods are backed up in a crippled port. Not if their customers are too busy escaping wildfires to buy, or financially tapped out repairing flood damage while waiting for insurance payouts. Not if major highways for employees or shipping are down to a single lane of traffic while many rail lines are shut down completely.

But conditions sometimes change more rapidly than people’s mental models. As we reported in 2020, the Kickapoo river in Wisconsin flooded Soldier’s Grove some 25 times in 38 years before the citizens dropped their sandbags and lit out for higher ground. Why did it take so long?

This is an example of what futurist Alex Steffen calls a ‘discontinuity,’ a time when “the experience and expertise you’ve built up over time cease to work,” requiring “a process of understanding [that] the world as we thought it was is no longer there.” Climate change appears to be provoking just such a process and humanity, as viewed through its public headlines and official press conferences, still has a long way to go.

As the analyst quoted above noted, some truly shocking weather events are yet to come. It would be wise to save the hyperbole for those.