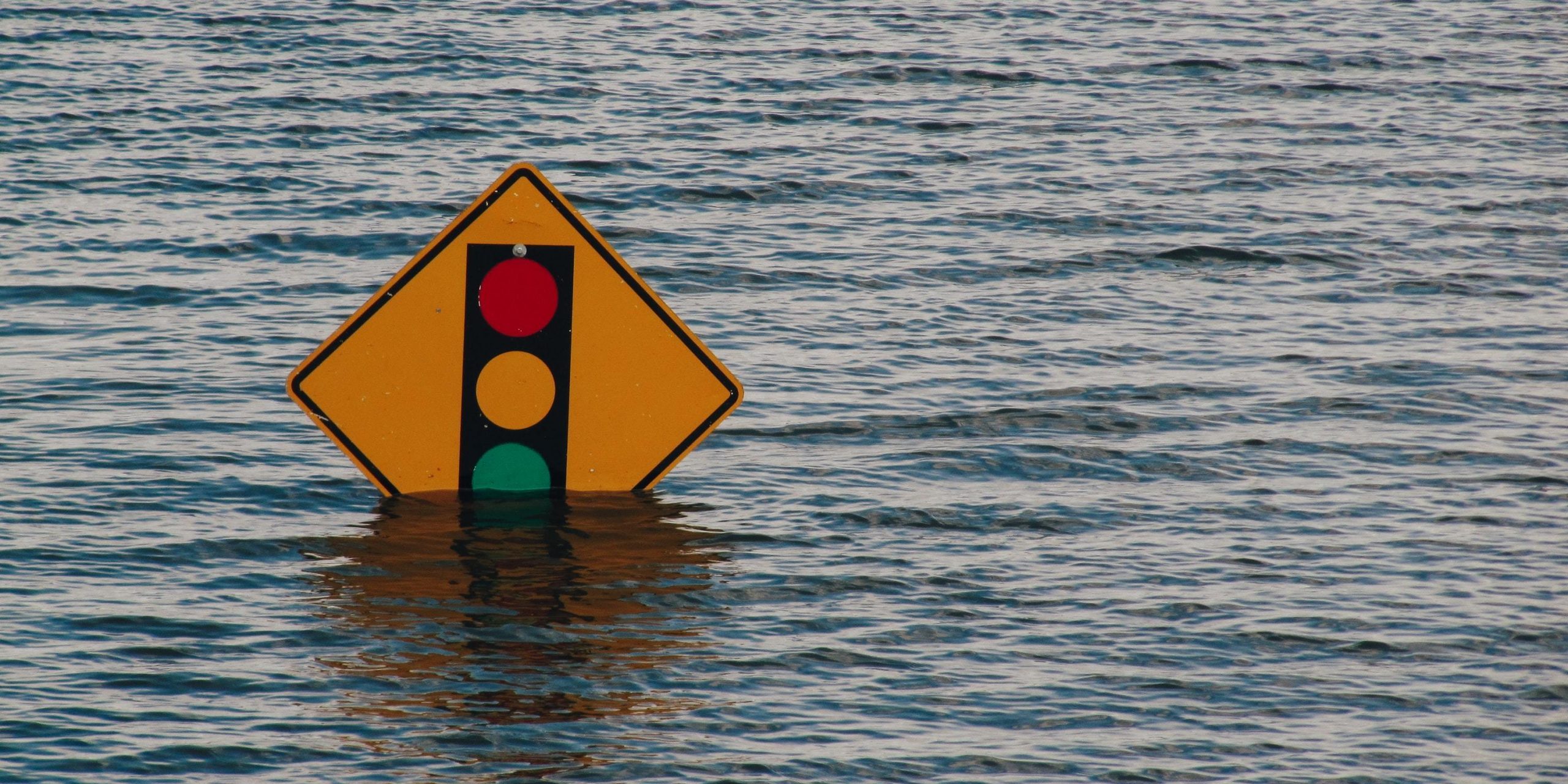 Lately we’ve become fascinated with risk. In particular we’re focused on what we call submerged risk, problematic hazards that lurk beneath the surface, invisible until they’re revealed by a disaster after the fact – or by a tool we’re developing (hey, this is us; of course we’re developing a tool) – is one type of risk.

But this story is not about submerged risk. Rather, it’s about the very visible risk of being submerged: millions of people and their communities will be under water due to rising sea levels, riparian flooding, and storm surges from more powerful storms – all driven by anthropomorphic climate change – if something isn’t done.

A new report on potentially inundated areas (PIA) shows that, “by 2100, areas now home to 200 million people could fall permanently below the high tide line” and “rising sea levels could within three decades push chronic floods higher than land currently home to 300 million people.”[1] This will likely result in massive instability, millions of environmental migrants (EM), battles over land rights and enormous economic strains over how to pay for any actions taken.

Sea levels are expected to rise by anywhere from half a meter to two meters over the next 8 decades[2] – estimating is tricky because of the need to nail the melting rates of the polar and Greenland ice caps.[3] Suffice to say a person 6’ (≈183cm) born today at sea level may be mostly or fully submerged when he turns 80. A six-foot rise will inundate vast stretches of land currently occupied by, well, by you and your family, your house, your business, your baseball diamond or your rice paddy.

Clearly, we must do something.
But what?

Well, we could continue business as usual, hope nothing happens, and try to rebuild when it does. That has been the approach up to now. Get crushed and rebuild – in the U.S., often with the help of the taxpayer-subsidized National Flood Insurance Program – on the same footprint. Wait a bit and – literally – rinse and repeat. But this is tough to manage when the land isn’t just flooded but has actually been reclaimed by the sea.

Besides, as these events transpire, insurers, whose actuaries grasped and embraced the facts of climate change early, will begin raising prices dramatically to offset increased risk, or will refuse to renew policies in inundation-prone zones.[4]

We could rebuild homes differently, on stilts for example, as communities in flood- or tide-prone areas have done throughout history. The problem here is that tide levels at par may stay beneath the floor, but more frequent and more powerful storms means higher storm surges and water moving higher and farther inland than before on top of higher sea levels. It could work in areas not prone to such storms – although as we’ve detailed in our cyclone story above, there will be fewer places like that going forward – and this may have to be considered in targeted communities.

The third option is to simply pick up and move those hundreds of millions of people – along with their shops, pets, schools, churches, and community buildings – to higher ground. Just pick ‘em up, lock, stock and Main Street. This is known as ‘managed retreat.’

This is not a new concept and “prehistoric tribes regularly packed up settlements along riverbanks when periodic floods struck.”[5] Since then it has been done occasionally on a small – usually very small – scale: a house or two. A cluster of families. In a few cases whole midwestern towns or English hamlets prone to flooding have been relocated or rebuilt on higher ground.

The U.S. government has begun, on a piecemeal basis, “offering to buy storm-damaged homes and homes likely to be damaged again due to an extreme weather event—purchasing homes and converting them to natural open space. This program, however, is entirely voluntary for the homeowners,”[6] which is assisting certain foresighted individuals but not solving the problem of probable inundation.

In some cases, there is no high ground to be moved to. “Indonesia has proposed moving its capital to Borneo Island, because up to one-third of Jakarta could be underwater by 2050. The low-lying Pacific island nation of Kiribati has bought land in Fiji to allow a future migration,” and many other examples. The average height of the land in the 1200-or so islands of this nation is “around 4 feet above sea level, and the highest point in the entire nation is just under 8 feet (about 2.4 meters).”[8] Where will these people go as the rising tides they did little to produce sweep over them?

For context, consider the case of Soldiers Grove, Wisconsin, on the banks of the usually placid Kickapoo River. According to a Federal Emergency Management Agency (FEMA) case study,

With classic myopic optimism, the town recovered and rebuilt in place every time until “the flood of record in 2007 inflicted the worst damage in the state just 10 miles downstream in Gays Mills.” At that point, they found higher ground and skedaddled.

That’s what it took to get just one town to move.

And consider what’s involved from a purely logistical standpoint. On an already crowded planet, what kind of land will there be, available to move vast numbers of people to? If fishermen now live next to their boats and farmers next to their fields, what will the impact of moving be on their livelihoods? Who will pay for the new land? New schools? New stores?

And, while areas like Florida and Louisiana in the United States are vulnerable, “the threat is concentrated in coastal Asia and could have profound economic and political consequences within the lifetimes of people alive today.” Many of these nations have neither the resources nor the infrastructure to cope well with such large-scale migration.

At the end of the day, however the logistics are managed, there may be little choice. The seas are rising. The storms are intensifying multiplying. Insurance companies – where they exist – won’t cover perpetual disaster and even the U.S. National Flood Insurance Program has bankrupted itself – it is nearly $25 billion in debt[10] – paying claims for properties it undervalued and therefore emboldening property owners to build where they should not, passing the risk to the U.S. treasury.[11]

Now
So the question is not if, but when and how. When, of course, should be now. But a quick Google search indicates clearly that managed retreat has not yet advanced in the public mind or in government planning.

This will change soon, as the inevitable begins and the sea begins claiming land from us wholesale, rather than retail as in the past. In any case, it might be wise to keep some galoshes handy and to head for the hills soon. Those hills may be islands before long.