Noah Had it Easy:
The Ark of Modern Species Preservation 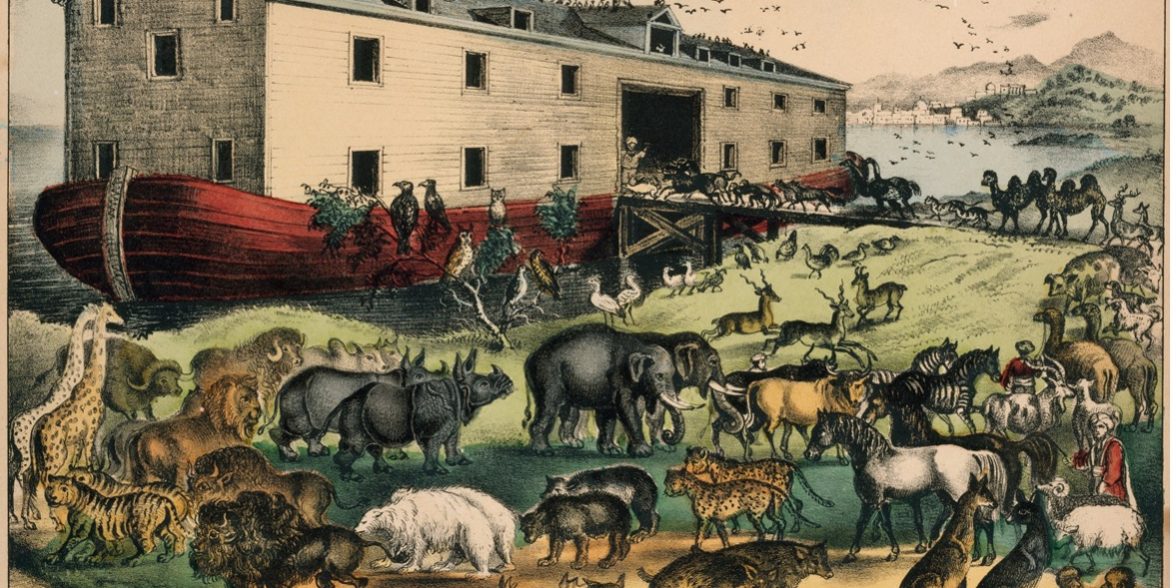 According to the Hebrew Bible, the last guy to save the world’s species was an old man – about 500 by then – with a big family and, apparently, some free time… and carpentry tools. He was relaxing under vine and fig tree enjoying some wine when an urgent message arrived. Sea levels were going to rise dramatically, he was told, and all life on Earth would be wiped out. He, and only he, could prevent the loss of all Earth’s fauna.

This would read like a prehistoric episode of Mission: Impossible but for one thing – Noah also received highly specific directives. Transportation, time frame, nature and duration of the disaster, number of cubits, and so on, were all clearly spelled out.[1]

No such luck for us. Today, those of us inhabiting this sphere of molten iron, rocky substrate, and water-filled basins, are operating without instructions.

The total number of living species on Earth is somewhere between 5 million and 1 trillion.[2] That’s quite a range, and some 18,000 new species are being discovered every year. As The Conversation charmingly reports, a recent survey found 14,000+ unclassified species of bacteria inhabiting the navels of U.S. university students.

So, how do we husband all these plants and animals? What will it take to keep Joshua trees and desert tortoises from departing this Earth? Many preservation efforts are global, run by NGOs whose mission it is to save wildlife. But just as often the work is local, based on the needs of specific species.

In August of last year, the L.A. Times chronicled the efforts of two California botanists to save a small, insignificant herb that thrives – or used to – in the Mojave salt flats in Nevada and California. Only a small population of Nitrophila mohavensis or Amargosa niterwort, remains “and most of the plants… have stopped producing viable seeds — stressed victims of decreasing rainfall, rising temperatures and the loss of groundwater due to pumping.”

Nonetheless, these scientists harvest the sparse seeds and pack them carefully away for storage in a seed bank’s freezer. Indeed, there are some 1,700 seed banks, or ‘gene banks’ globally, with millions of seeds studied and cataloged in case, as Valutus recently detailed, some of them have the appropriate characteristics to withstand changed climatic conditions.

Tiny, highly localized and unknown plants like this Amargosa niterwort, or giant Sequoias, Joshua trees, and baobabs – icons all – might soon be lost. Indeed, some “20% of the 300,000 plant species we know are also in danger of extinction,” according to a 2019 U.N. report. “Intensive farming and livestock practices, unfettered urban development and pollution, have altered three quarters of the land surface… and are responsible for the ever-lengthening list of threatened vegetation.”

Seed banks such as those noted above are critical because “the world’s seed-bearing plants have been disappearing at a rate of nearly 3 species a year since 1900… up to 500 times higher than would be expected as a result of natural forces alone,” notes Nature, and husbanding their seeds for future planting – when and if conditions are more favorable – could be the difference between total extinction and a chance at survival.

For animals it’s not quite so simple. Though most would resent being kept in a sealed foil package in a vault below the Arctic tundra, as many seeds are, some animals’ ‘seed’ is being kept in cryogenic stasis where both eggs and sperm can be saved until conditions are right to resurrect them. It would have raised Noah’s eyebrows, but some claim it is the future for endangered animals.

Another method hiding in plain sight is the global network of zoos and aquariums which, despite criticism in some quarters, are currently important repositories of critically endangered species, with many specimens no longer existing anywhere in the wild. The Association of Zoos and Aquariums (AZA) claims to have approximately 900 species classified by the International Union for Conservation of Nature (IUCN) as Vulnerable to Extinct in the wild at AZA member facilities.

A young Przewalski’s stallion in the Khustain mountains, Mongolia. Przewalski’s
horse was saved from extinction by a captive breeding program. As of last count (2020)
there were more than 1,200 in the wilds of Mongolia, China, and Russia.
Photo by Tengis Galamez / Unsplash

In 2021, two viable embryos of the northern white rhino, which is functionally extinct, were created in vitro bringing the total to five. Only two living northern white specimens – both females, currently in the Ol Pejeta conservancy in Kenya – remain on Earth and the embryos, created from both living and dead animals, have revived a modicum of hope that the species can, someday, be restored. If there is good news here it is that their southern cousins, once listed at less than 100 animals, now boast a herd of more than 17,000 due to efforts by conservationists and the South African government.

In the end, the best way to preserve animals and plants in their natural habitats is to preserve the habitats themselves. This humanity has, so far, failed to do. There will be floods, to be sure, and the seas will rise, but a simple ark cannot suffice to preserve all that is at now risk. Let’s face it: Noah had it easy.