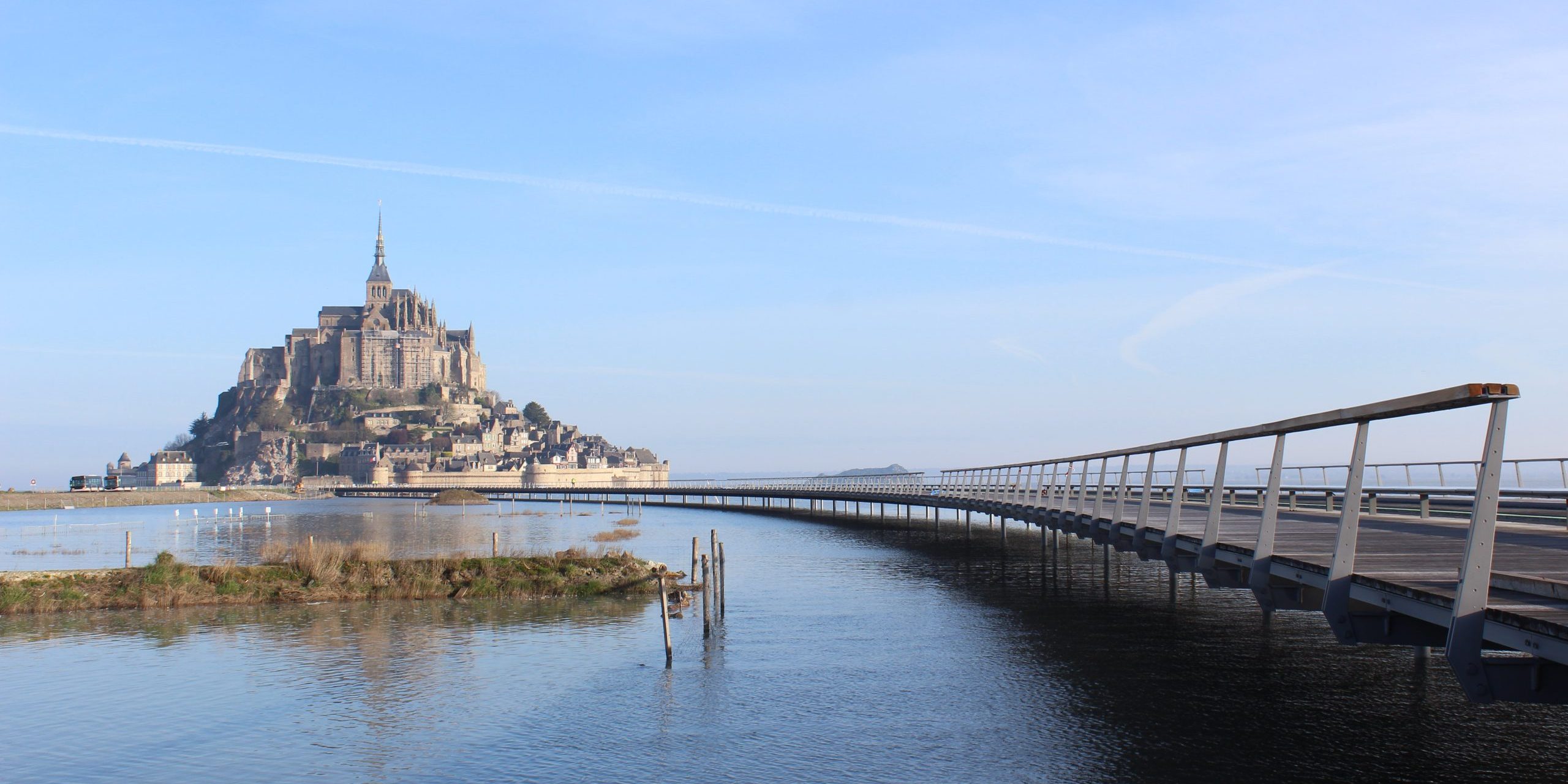 The massive eighth-century chateaux of Le Mont-Saint Michel is ensconced at the mouth of Couesnon river off the coast of Normandy, France, about a kilometer into the English Channel.

It’s a picturesque little cantonment and a cherished venue for some 3 million tourists annually. Aside from the charming town, and the Abbey with its famed stained-glass windows, Mont-Saint Michel has one feature that sets it apart from many similar towns in Europe: when the tide comes in, Mont-Saint Michel becomes an island.

This is unique – for the moment. But it won’t be for long.

Consider that a new bridge connecting the Cantonment with the mainland opened in 2014 and, the very next year, during what was considered an unusual ‘super-tide,’ said bridge was almost completely submerged. Since such tides may not be unusual at all going forward – for sea level rise (SLR) continues apace – access to the rock may soon require a boat or a wait until neap tide.

The last time CO2 was at the current atmospheric level of 400 parts-per-million (415 ppm currently), sea levels were more than 50 feet higher than today, according to two groups of scientists working independently, who found that CO2 levels have not been this high since the late Pliocene era some 3 million years ago, when “oceans were at least 15 meters (49 ft) deeper” than today.[1]

This is not to suggest sea levels will rise that steeply again. Most projections have the oceans lifted from between 2 and 6 feet this century,[2] though there is constant updating and debating as new findings come in and that range could turn out to be low.[3]

Still, as we recently wrote,[4] even at those levels the impacts will be global, massive, and devastating. Two to three hundred million people are expected to be refugees of flooding and inundation, as cities and coastlines around the globe are assailed by rising tides, and hinterlands are regularly flooded by rivers and storm surge.[5]

But it’s not just people’s homes and businesses that will be impacted. Other places may come to resemble Mont-Saint Michel, whose shiny new bridge may be all but useless in the next decade or two. Public infrastructure, as well as individual holdings, are going to take a beating and require support as the waters rise.

One possible response to this state of affairs – what we’ll call the Planet Krypton solution – is to do nothing and hope the climate experts are wrong. Although many people are working tirelessly to prevent this from being the route we take, far too many are content to travel this road.

Another approach – what we’ll call the Noah’s Ark solution (more correctly referred to as Managed Retreat)[6] – involves moving whole communities to higher ground in an orderly fashion, rather than the disorganized rout that will ensue if the Krypton model prevails.

But there is a third option – what we’ll call the Dutch Dike or civil-engineering approach – used for generations by a state surrounded by encroaching seas. With a quarter of its land below mean sea level (MSL) and almost a third of it at risk of inundation and significant riverain flooding,[7] Holland has used dams, levees, seawalls, reservoirs, tidal canals, and stilted buildings to hold back damage from the waves. All of these, and any other solutions the modern mind can imagine, will be needed in the coming years to keep thousands of communities dry and safe.

Schools, railways, causeways, airports, arterial roadways, and more, will need structural changes to remain functional in a world without polar caps. Everyone has seen a flooded underpass but, as a Stanford University study released this month warned of the roads in Northern California, “the domino effect of flooding… is going to require a redesign of transportation systems as sea levels, storm surges and flooding worsen over the next thirty years. Otherwise, more extreme weather conditions could paralyze road transportation.”[8] Yikes.

But roads are only part of the transportation infrastructure under attack from SLR. For obvious reasons, many coastal cities place their airports near the waterfront, with runways often just a few meters above the waves. An analysis by Resource Watch found that, if mean sea levels (MSL) rose only one meter (3.28 ft) – well within the majority of predictions – around 80 airports globally would be flooded and useless.[9]

In fact, at just half that level, runways in Florida, California, Denmark, China, Iran, and more could be under water.[10]

Indeed, the runways at Kansai International Airport near Osaka, Japan, are receiving a multi-million-dollar refit complete with seawalls and raised runways, after the whole airport was covered by seawater during a typhoon.[11]

Even at current levels, the storm surge from Hurricane Sandy flooded the New York airports and much of the underground portion of the New York City subway system, severely restricting mobility throughout much of the city.[12]

This doesn’t just affect regular citizens. Emergency services planners in New York City have determined that as the seas rise, the time it will take to reach those in need, already impacted by traffic during a flood and storm, “is expected to be further aggravated during coastal flooding, (which) is set to increase in frequency and magnitude” due to SLR.[13]

Indeed, during hurricane Hugo in 1989, in a hospital in Charleston, “engineers had to shut off the generator that fed the intensive care unit… and ran portable generators with extension cords to the ICU. When the floods receded, flounder, crabs and mud covered the concrete floor. The storm revealed how susceptible the hospital’s critical infrastructure is to rising water.”[14]

Unfortunately, the whole area is low lying and floods are now common. “During a tropical storm in 2017, personnel crisscrossed the campus in boats. [The hospital] even bought a military surplus high-water vehicle to make sure staff can move between hospitals.”[15] Hurricane, storm surge, or direct SLR threatens such systems in low-lying cities all around the world.

Military operations may be hampered, too. “Ten times a year,” noted National Geographic, “the Naval Station Norfolk floods. The entry road swamps. Connecting roads become impassable. Crossing from one side of the base to the other becomes impossible. Dockside, floodwaters overtop the concrete piers, shorting power hookups to the mighty ships that are docked in the world’s largest naval base… all it takes to cause such disarray these days is a full moon, which triggers exceptionally high tides.”[16]

That, of course, is under current conditions. As things progress, “Norfolk station will flood 280 times a year,” or about 77% of the time, noted the Union of Concerned Scientists in a 2016 report that detailed climate risks at 18 military installations around the United States.[17]

Homes are possible to move, but a naval base? Runways of 1.5 miles? Airport towers? These assets may be so challenging to move they may require the Dutch Dike approach, where feasible. Runways could perhaps be walled. Indeed, Boston and San Francisco have erected seawalls in the last few years[18] or elevated in some cases.

Water resources may also need to be rethought, as rising volumes of saltwater infiltrating traditionally fresh groundwater supplies could make many aquifers and drinking-water sources unusable without desalination. As the National Environmental Education Foundation reported this year, “the amount of saltwater infiltrating the (Biscayne) groundwater aquifer will increase, which can make the water too salty for human consumption.”[19]

Some Solutions
The sheer number of projects needed to protect infrastructure world-wide is so vast it is difficult to comprehend. Infrastructure is built locally, designed to last over time based on the conditions that obtain at the time. The New York Subway system was built when sea levels were not known to be rising quickly and hurricanes ranging that far north were quite rare. Meanwhile, most at-risk airports were deliberately built as near to sea level as possible and most water systems were not designed to cope with vast inland storm surge and riparian flooding.

As such, remedial plans are too many to be described here. But the questions of who is responsible for all this, and how it will be paid for, is becoming top-of-mind for many planners.[20]

There have been some comprehensive studies on the cost of SLR preparation and mediation that encompass the global community,[22] but the uncertainty about the actual levels of rise, the potential arrest of global warming during the century, and the sheer number and scope of the infrastructure needed makes any assessment uncertain at best.

Some of the costs are – pardon the expression – submerged costs, in that they are secondary and tertiary costs that derive from other costs. For example, according to one analysis, by 2017 “flood-prone areas in New York, New Jersey, and Connecticut [had] lost $6.7 billion in home values,” and the total across eight states was over $14 billion.[23]

There are other hidden risks, too. Two years ago, researchers performed a risk assessment for fiber optic cable in the U.S. and found that more than 4,000 miles (6,437 kilometers) of the stuff was at risk, especially around New York City, Seattle and Miami. As the author’s note, “while the standard buried fiber conduits are designed to be water and weather resistant, most of the deployed conduits are not designed to be under water permanently,”[24] as they would likely be under NOAA SLR projections.

Another less visible impact is that, as the Smithsonian’s Ocean Portal Team noted in 2018, “Sea level rise is not just a problem of water, it is also a problem of salt. Imagine if salt water flooded a farmer’s field, or a coastal forest. Not only does the area have to survive flooding, but also a drenching in salt water that can kill plants and irreversibly alter soil chemistry. Saltwater flooding can mean death for these ecosystems. Already scientists have seen stands of “ghost forests” where once-healthy trees were killed by saltwater flooding, and farmers’ fields are being converted to tidal marsh and salt flats.”[25]

Stepping back, a new study published in Nature this year found scientists from Australia, Germany and Holland reporting that global SLR was likely to cause more than $14 Trillion – with a T – in damage to infrastructure around the world.[26]

Hanging above all of this is the impact of skittish insurance companies unwilling to cover climate disaster-prone systems and structures. As we’ve reported in the past, this is only going to grow as all of the impacts become clear.[27]

The world does not yet have its arms around the reality that more and more places will be islands either all or half the time as this century ages. Yet, it is time to come to close grips with the reality of this phenomenon. “The historical approach to sea level rise was that the threat was going to happen at the end of the century,” noted one author of the Stanford study. “It’s not. It’s happening right now.”[28]

The folks who live on the charming cantonment of Mont-Saint Michel are accustomed to a home that is an island half the time. For the rest of us however, that’s a far less charming future.