Sand for Our Castles 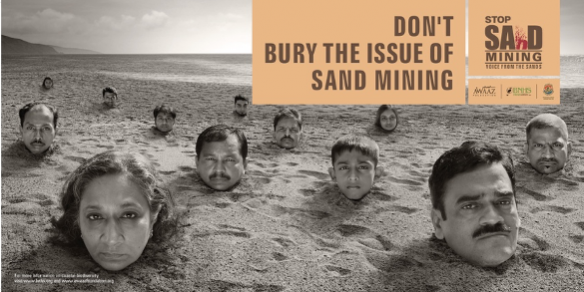 Every year, miners harvest some 50 billion tons of sand from pits, beaches, riverbeds and ocean floors. For context, that’s just a smidgen more than 8,695 Great Pyramids. That’s every year. Ironically, however, the sands laying abundantly around the pyramids are worthless for construction, which is why all that sand is culled elsewhere – notably from riverbeds.

This is all so we can make the most ubiquitous mixed material in the world: concrete. A staggering 10 Billion tons of the stuff – 17,390 Great Pyramids’ worth, plus-or-minus a sphinx – is made each year from this sand and other aggregate materials. In essence, our roads and cities rise as our sand levels fall.

Problem is, it’s not just the depth of the riverbed after dredging and mining. There is ample evidence that water tables are negatively affected, riverbanks are prone to caving, and that water-dwellers and other local wildlife are impacted.

Well, you may say, so a little bit of the bank caves in, what’s the big deal? It’s that rapid gouging of the banks and bed cause changes in water flow and render the banks unstable. In 2017 a heavily populated section of the Vam Nao river in the Mekong delta collapsed. “The direct cause of the landslide was a huge underwater whirlpool that formed 180 meters away from land. The whirlpool was 380 meters long and 42 meters below the surface, and was likely a product of excessive sand theft.”[1] Sixteen homes plunged directly into the river after cracks formed well inland of the bank.

In July and August of last year, sections of National Highway 91 in An Giang province, Vietnam, collapsed due, residents said, to ubiquitous sand dredging operations in the area along with the damming issue noted above.

Every concrete building, bridge, retaining wall, highway, lane divider, skyscraper, sidewalk and skateboard park is made largely from sand, so it’s no surprise that we need so much.

But where does it come from? Can’t we just wheel a line of trucks to a loading dock in the Sahara? If so, we’d just be slowly emptying the world’s largest sandbox with little harm done.

Nope. Very specific grain characteristics are needed for various applications. Concrete, for example, cannot contain shell fragments, while other mixtures prefer them. The shape of the grains – based on their source materials and the type of erosion that ground them – also determines how they bind together and whether they are appropriate for a given material. When it comes to concrete, notes National Geographic, “river sand is best: grains of desert sand are often too rounded to serve as industrial binding agents, and marine sand is corrosive.”

All sand mining has consequences at scale – especially at such a gigantic scale – but it seems that riparian mining operations are causing some of the most serious damage.

There have been a number of reports this year about issues with sand mining in the Mekong delta, based on a University of Southampton study that included sonar soundings of the riverbed, as well as comprehensive assessments of the damage this practice has on the local environment.

However, this goes far beyond the Mekong, especially to India – where a building boom has spurred the need for ever-more concrete – and China. China, The Independent notes, “since 2003…has poured more concrete every three years than the United States did in the entire 20th century.” Rivers and deltas around the world are in trouble due to both legal and illegal dredging of sand and gravel.

Considering it took many thousands of years to put it all there, it’s rather hard to replace. Though it comes from eroded rocks and shells, and will replenish over time, it is not considered a renewable resource. Researchers on the Mekong, for example, say sand there is being removed around twice as fast as it is being replenished. (Exacerbating this problem is a number of new dams which block up-to half the sediment that used to flow freely into the delta.)

While gold, coal, and iron are generally culled from empty lands, the best sands are found on the world’s original superhighways: our river systems, where a vast number of us live and work, and whose health we depend on.

“That is a problem,” noted Reuters in 2018, “not only because the deltas are home to millions of people but because they produce a significant share of the region’s food. Deltas dependent on the Ganges-Brahmaputra-Meghna, Mekong and Yangtze rivers are now sinking and shrinking… a situation worsened by climate-related warming and rising seas.”

So, what to do? How do we build our sandcastles without using sand? Are there any solutions immediately available to replace the need for sand and other aggregates?

For the moment the answer will lie in standards and laws – and their actual enforcement – and on regulations of the sand mining industry. Currently, it is a largely unregulated business, wide open to corruption – at least one Indian minister has lost his job over it – and, as long as the world needs concrete, that is unlikely to change.

For the future, alternatives to concrete are under development or actually in use, some of which may be far superior as a material, as well as sequestering carbon rather than the reverse. See our articles “Can We Decarbonate the Concrete Jungle?” and Concrete Steps Reduce Concrete CO2″ for an exploration of these alternatives.