Can We Decarbon the Concrete Jungle? 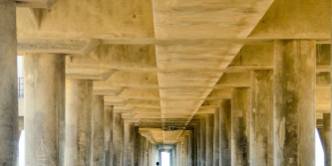 It’s hard to discuss sand mining – which, as we discuss in Sand, above, is an enormous, largely unregulated and deeply destructive industry – without also talking about concrete. If we were not building at such a pace we would not need enough sand to keep pace. However, the construction boom continues and, as long as China is using every three years as much concrete as the United States poured in the whole 20th century, sand will be needed.

India is not far behind and the rest of Asia is nipping at their heels, so far as concrete is concerned. Other than a moratorium on new construction, there is no way out of this – forgive us – sand trap.

Or is there, we wondered? Could there be alternatives to concrete? Something that did not produce 8% of the world’s CO2 emissions and require enough sand to make a band more than 30m high by 30m wide around the earth?[1]

Now, we understand there have always been natural building materials, dwellings of rock, wood, mud, adobe, and clay. Bamboo and rice straw were pressed into service, as were dung and thatch, with a little moss, perhaps, for a rooftop. There still remain nomadic cultures living in tents and temporary structures they can fold and carry. While for us perdurable folk, brick – which has its own set of serious environmental issues – appeals strongly.

Yet none of these has the strength, the stability, he flexibility, the durability, and the incredible availability, of cement and concrete. Without it, New York would be just another village. Dubai and Singapore, Kuala Lumpur, Shanghai, and Toronto would have no sky-high bragging rights. We might still be driving on dirt and using lead for water pipes like our predecessors the Romans.

Now that homes are being digitally printed – which adds incredible speed to the list of concrete’s useful qualities – we are forced to wonder, is there anything else that could be used? Any alternative that can do what concrete can, without the enormous an irresolvable environmental costs? Rather to our surprise, we’ve found a few.

Ferrock
The first of these, known as Ferrock, does three things better than concrete.

On the other side, it is iffy for large-scale construction simply because it relies on secondary materials that may not be supplied in large enough batches.

Hempcrete
Another material, with the ungainly name of ‘Hempcrete’ is made from a combination of hemp hurds – the woody stems of hemp plants – and sand, lime or other rocky materials. Hempcrete also stores the carbon ingested by the hemp permanently in the building materials, at between 130 – 165 kg per m³.

It is far less dense (15%) than traditional concrete and so is unsuitable as a foundational material. However it is also more flexible and has excellent insulating and weather resistance properties. Up to now, that majority of this material has been used in France, a major producer of hemp, however it is making inroads elsewhere including the United States.

Grasscrete
One of the most intriguing material types is permeable pavements. A lattice of concrete or other materials is poured or formed in a lace-like permeable lattice, leaving thousands of openings for organic materials. Designed primarily for flat surfaces rather than taller structures, such as walkways, driveways, and sidewalks, this approach has the dual advantages of reducing the amount of concrete used and also creating  greenspace helpful for carbon capture and – most importantly – for flood capture and drainage. Some brands, such as Grasscrete, also make retaining or garden walls where vegetation or drainage is desired.

Mycelium
Look, we didn’t make this one up, but there’s a company making structures from mushrooms. Uh huh. Mushrooms. An architect has taken mycelia – the strong, fast-growing, and interconnecting rooty structures of mushrooms – and has begun practicing ‘mycotechture’. Essentially, a frame is built and filled with porous materials – such as straw — and inoculated with mycelia which are encouraged to grow around these forms and become part of the filler material, creating a strong, durable, totally organic structures. You can see one here, and we hope you do because, really, we didn’t make this up!

Ashcrete
Another innovative approach is known as Ashcrete, a material made from solid waste incinerator fly ash and bottom ash. The U.S. alone creates more than 8 million metric tons of this material annually. Other nations, such as India, are seeing an opportunity in waste-to-energy plants, which incinerate trash and create electricity in the process. Such nations are building more plants and ash – the other by-product beside energy – is plentiful.

Meanwhile, there’s a lot of ash and Ashcrete has created a product that they say turns “Municipal Solid Waste (MSW) Incineration Bottom Ash and Combined Ash into a [concrete-like] composite material,” suitable for major, large-scale-construction projects such as roads, marine structures such as seawalls, bridges, and concrete-structure applications. As such ash generally ends up in landfills, this is potentially an excellent opportunity to reuse household materials to sink carbon.

And More
There are many substitutes available and more on the horizon. As we’ve seen above, these materials may individually fill important roles in reducing or replacing conventional concrete. Only a few – so far – are appropriate for taller, more massive structures such as skyscrapers, yet others are perfect for smaller dwellings and ancillary structures.

None of these have yet taken hold enough to stop the movement of sand from our rivers and beaches to our cities. The good news is, there’s tremendous innovation underway, and every structure made from something other than cement and concrete is a win for the environment.