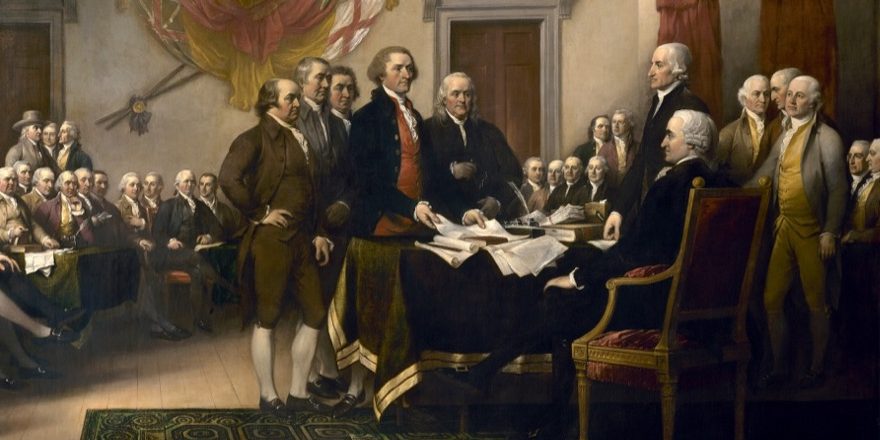 Painting of the Signing of the Declaration of Independence (1819). Artist: John Trumbull

John Adams (as portrayed in the Broadway musical 1776) harangued his colleagues in the Continental Congress to “vote yes! Vote yes! Vote for independency!” His fellows soon tired of the diatribe and begged, “It’s ninety degrees! Have mercy, John, please. It’s hot as hell in Philadelphia!”

The high temperature in Philadelphia that summer was – according to diaries kept by Adams’ protégé Thomas Jefferson and others at the time – a comfortable 76-degrees Fahrenheit, some nine degrees cooler than the current summer normal for that city. Given that rise, dare we ask: if it seemed hot in Philadelphia then, and gets hot in Philadelphia now… what will the city be like in 2076 if we don’t address the climate?

Of course, the U.S. Constitution – hammered out some 13 years later to broadly define principles the framers considered most important to building and safeguarding the nation – did not mention the environment.

Those framers were concerned with structural foundational pillars, such as strengthening the union, keeping peace internally, defending against attacks from abroad, and ensuring liberty for all. With the Constitutional Convention also held in Philadelphia’s mild 18th-century summer, it never occurred to Hamilton, Madison, et al, that the global environment could ever require protection.

The notion of environmental husbandry didn’t strike the original Roman senate either, or their heirs, the framers of Italy’s modern constitution. But now, after a landmark shift, the Romans’ descendants in the current Chamber of Deputies have rectified that.

Section of an 1888 fresco depicting an attack on Catiline by the emperor Cicero in the Palazzo Madama,
home of the Italian Senate in Rome. Artist: Cesare Maccari. Image source: Wikipedia

Article 9 of the Italian constitution, entitled ‘Research and Culture,’ initially fit Italy’s special historical status as snugly as an emperor’s toga. The whole country is part museum, part archeological site, and library of Western history and culture rolled into one. But while the constitutional court has traditionally ‘broadly interpreted’ article 9 to include environmental issues, such was never explicit.

Now, it is. As of this February, for the first time since Romulus ruled the land, two additions to the costituzione have made environmental husbandry a pillar of Italy’s values as a nation. Article 9 now includes “protection of the environment, biodiversity and ecosystems, even in the interest of future generations,” as a fundamental principle – what the Italians call a ‘protected primary value.’ No longer is sustainability relegated to an afterthought, a patchwork of laws, some regulatory language, and broad interpolations of previous constitutional passages.

Nor is it a matter left to the conscience of corporate officers, for a second new line was added to Article 41 – “Freedom of Enterprise” – that reads, “private economic initiatives shall not be carried out “in such a way as to damage health and the environment.”