The Sound of Thin Ice:
The Cryosphere is Crying 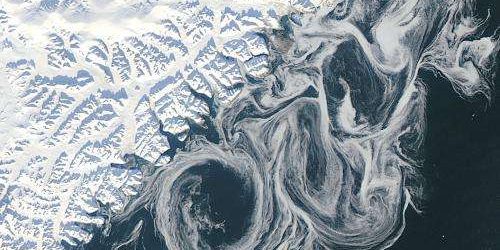 One Monday afternoon towards the end of the Cretaceous period, a large T. Rex in what would one day be Montana, was munching on someone and observing that the weather was swampier than usual. The Karoo ice age had ended 200 million years before and Earth was moist, warm, and verdant.

A couple of years later – about 40 million, give or take an epoch – a few small glaciers formed atop Antarctica’s mountain ranges. But it wasn’t until around 14 million years ago – a geologic minute – that thick sheets of ice began blanketing that continent, and ten or twelve million more years that glaciation and sea ice formed in the high northern latitudes. When the paleolithic ice age ended roughly 12,000 years ago, just as Homo Sapiens were testing their balance, Earth was left with cozy little ice caps at the poles, ample glaciation at higher altitudes, cyclically frozen lakes and oceans, and permanently icy tundra and seabed around the Arctic and Antarctic regions. Together, these made up the cryosphere, a critical and beautifully balanced component of modern Earth’s delicate ecological system.

Then came the Anthropocene[1] age: us. Once we humans began walking upright and making Chevrolets, we could accomplish what only things like volcanoes, asteroid strikes, and changes in Earth’s orbit had done before: rapidly melt the cryosphere. And melt it we are. Earth is now losing 87,000 square kilometers annually of what natural processes took millions of years to produce, and the process is still accelerating.

This month, the New York Times published an unsettling report on the glaciers of the Svalbard archipelago off Norway. Creating 3D images from 20th-century black-and-white photos and comparing them with modern digitized image models revealed a frightening level of ice loss, with thinning happening almost twice as fast so far this century as last.

That cautionary tale, along with the bones of that T. Rex – whose entire clade was wiped out, presumably, by rapid changes in the climate[2] – tell us this puddling of our waters is cause for alarm. “The cryosphere…is the [first] indicator to demonstrate a changing world,” according to Xiaoqing Peng, author of a 2021 study measuring the extent of cryosphere degradation. “Its change in size represents a major global change, rather than a regional or local issue.”

The most obvious of these planetary impacts is higher sea levels, but there are plenty of others. The water cycle, involving global evaporation levels, ocean salt concentrations, cloud cover, and more, is becoming more intense. It is “speeding up the rate at which water evaporates in one area and falls as rain or snow somewhere else,” resulting in drought here, deluge over there. This increases wildfire potential, impacts ocean currents and marine life, and on and on.

Dry basin of the Colorado River, Sonora, Mexico. The river often runs dry about 5 miles from its
mouth in the Sea of Cortez. Photo by Pete McBride, U.S.G.S. Source: Wikimedia Commons

Alternating periods of ice and thaw are – as climate skeptics are fond of pointing out – quite natural, and likely to continue. But the onset of the next ice age, calculated to begin about 50,000 years hence, is apparently going to be rained out. According to a 2016 study, carbon added to the atmosphere by human activity has pushed it out by an additional 100,000 years or so and levels of carbon continue to rise.

Unchecked, this type of carbon loading may lead, some 40 million years down the road, to another large and hungry theropod in what used to be Montana, delicately munching a bone, and saying in clipped tones, “wow, it sure is swampy today.”

[1] The term Anthropocene has been recommended for adoption in 2019 by the Anthropocene Working Group (AWG) of the International Commission on Stratigraphy (ICS). The recommendation was submitted in 2021 but has not yet been formally adopted. Technically, Earth remains in the Holocene Epoch.

[2] This is the generally, though not universally, accepted explanation – Ed.