Tilting our Windmills: Vertical Turbines in the Fast Lane 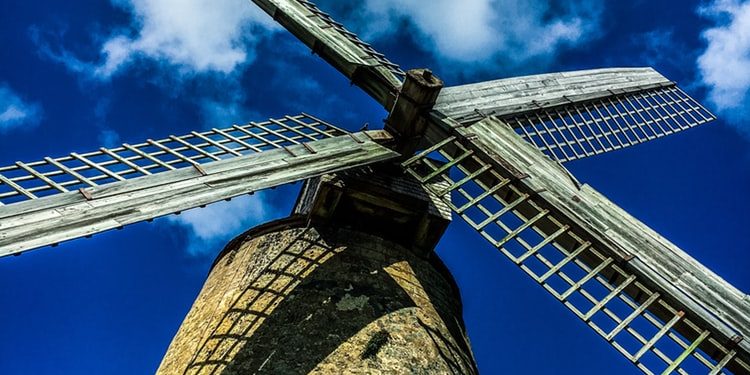 The quaint windmills of yesteryear still dot the Dutch countryside. Huge white tower-and-tine jobs now pepper the fields and plains. There are even small pinwheels on rooftops, capturing the uneven urban breezes.

Yet all these rely on natural airflows to turn them. But anyone who’s ever changed a tire while semi-trailers cannon past; or stood at the entrance to a subway tunnel as the train approaches, knows just how much wind — kinetic energy — these machines generate. Yet this force, powerful as it is, blows wastefully away, dissipating in some field or side-tunnel somewhere.

Wait a minute! Wait just a doggone minute, what if we could harvest this energy into power to light our homes and run our machines? What has been lacking are specialized turbines, with blades small enough to harvest this energy along a busy road or a tight tunnel, feeding it to the grid for use in our other human endeavors. And, as vehicle-generated wind is inconsistent, “the design of a wind turbine must include the storage of energy and a system to distribute the generated power effectively,” notes Altenergymag.com.

There have been several attempts to interest the world in such turbines but currently, so far as we can determine, there are only a few companies actually doing so.

There is a startup in Turkey, testing their turbines on a busy Istanbul busway, while Capture Mobility, the brainchild of Sanwal Muneer, who formed the idea while standing at the side of an auto racetrack, has built a prototype near Dundee.

These turbines stand vertically and do not need long blades in order to capture favorable winds. They take up a tiny footprint, standing just a few meters tall and spinning without horizontal blades, so they are appropriate for a sidewalk, a center median, or a highway shoulder. Turbines set in the center can capture airflow from traffic going in both directions, for even more efficiency.

The Turkish model, Enlil, by Deveci Tech, stands in the median on a busy busway, and captures both natural and vehicle-generated wind. There is a small solar panel atop the unit to capture even more energy, while the storage battery is below ground. Further, the structure is equipped with smart tech, interfacing with the electrical grid of course, but also capturing seismic data, air quality, wind patterns, CO2 levels, and more.

The design also contains a connection for driverless vehicles and a wi-fi emitter. Each of the Enlil units is expected to generate more than a kilowatt of electricity each hour, enough, the company claims, “to meet the power requirements of two homes.” At scale then, along a highway or busy thoroughfare, there is vast power available from energy that is currently wasted, buffeting off buildings or whistling along avenues and open fields.

This model is also an advantage in urban areas, where the thirst for power strains even the largest grid at peak, but where the huge, iconic blades of most turbines are problematic. Such turbines have wingspans up to 100 meters (325 ft.), a soccer pitch or so. When we consider that the broad Champs-Élysées in Paris is only 70 meters wide, it’s clear these behemoths are not meant for urbanites.

In addition, unlike offshore farms and mountain passes, city winds tend to be localized, with complex flows, vortices and updrafts due to the heights and shapes of a cityscape. Winds generated by traffic flows, however, are relatively constant, moving in a uniform direction each time a vehicle passes. The smaller turbines are also less vulnerable in hurricane-like conditions and are not problematic for birds or other flying creatures.

So far, the upright traffic-driven turbine is in the testing stages, but we hope to see this concept proliferate. It’s the kind of elegant solution we at Valutus like: Simple, inexpensive, easily scalable, and easy for governments large and small to understand and to purchase.