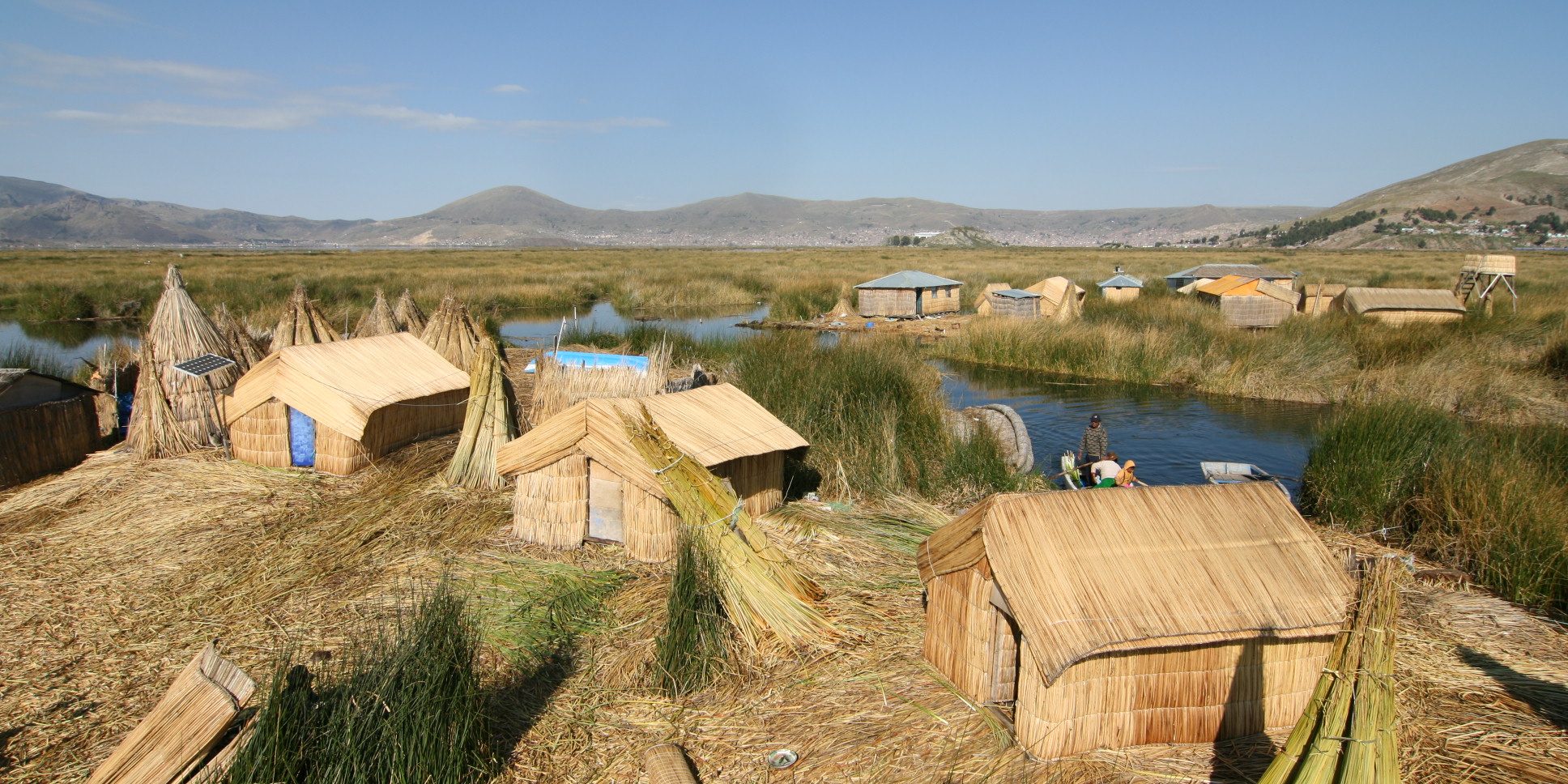 You wake up, oblivious to the gentle oscillations under the floor, and cross the reed mats to your tethered cormorant to see if it has caught a frog or catfish for your breakfast.

Grab a few eggs from the domesticated Ibis, pull up some totora roots from the lakebed, and start your omelet. The glare from early morning sun on Lake Titicaca is blinding so you re-enter your house, never noticing that it is dipping and rising a little more than usual today. Must be the wind across the small, floating island of some dozen houses you share with others of your tribe.

Of course, this is all taking place in the Peruvian Andes, 12,500 ft (3,800 m) above the ocean and sea level rise is not exactly a concern. But the Uru peoples’ floating homes can be instructive for those of us who dwell a little lower down.

As we’ve been documenting, in the next few years, hundreds of millions of people are going to be permanently or periodically underwater unless we find creative solutions to hold back, manage, or adapt to higher sea levels. Managed retreat, forced relocation, call it what you will, whole societies will need to live differently. If it’s possible to find space inland or on higher ground, so be it. If not, well, adapting to the Uru model may be just the ticket.

The Uru drive Eucalyptus pilings into the lake bottom and build homes atop root-and-reed matts tethered to them, to form small floating islands, and they have been doing so for generations. These are not boats. They are floating homes.

The essential difference between the above and house ‘boats’ is permanence. Houseboats are simply mobile boats on which people live. Floating houses on the other hand are built in place or towed to their destination, designed to remain there either attached to floatable foundations or, as with the Uru, tethered to the lake, river, or seabed.

With the air warming, seas rising, and storms surging, others around the globe who may never have heard of the Uru are floating their homes as well, with many more to come.

Indeed, adaptation to rising oceans is so urgent the magazine Science recently dedicated an entire issue to the matter in which they remark that “globally, sea level rise alone could place 340 million people on land projected to be below annual flood levels by 2050.” In other words, approximately the population of the United States will be displaced, and their communities permanently or periodically inundated, within the next 30 years.

It seems clear that floating homes must be a part of the solution: there are simply too many places where relocation is impractical or impossible.

Holland, for example, now has floating communities on rivers in several towns including Amsterdam and Rotterdam, homes attached to anchored ‘moorings.’ Like the Urus’ homes these are not boats: they are permanently tethered to the bottom and fitted with all modern conveniences – no ibis omelets but plenty of heat, light, and plumbing.

The placid Rotterdam waterway in which these new homes are moored – the Nieuwe Maas – is nonetheless connected to the rough and intemperate North Sea at the nearby port. As such, these structures are subject to changing sea levels and bob up and down with the tides every six hours or so.

“The height difference between the extremes of the ebb and flow – high and low tide – ranges from one and a half to two metres in the Nassau harbour. This was taken into account… during the construction of the floating homes,” according to a Rotterdam newsletter.

This model is helpful for expanding a city, making use of previously unusable river and canal banks, and proofing homes against floods from rising baseline sea levels.

But what about areas where the full force of climate change – ever-more-frequent and violent storms, higher storm surges, inundation, and flash floods – hit the area? Places like the southern US coastline, the eastern coast of India, and Singapore where the land is just above current sea level, also may benefit from floating homes.

If communities expected to be submerged or chronically engulfed by storm surge are to survive, they will require homes that can withstand such conditions. Higher ground is, of course, the simplest option but not all communities have the will, resources, and land needed to move.

Many communities – consider the Florida Keys, the Maldives, the ports on the southern Mississippi, and nations like Bangladesh – are in flat areas where ‘higher ground’ does not exist.

Galveston, Texas, on the Gulf of Mexico, is such a location and, in 2008, Hurricane Ike levelled a community on the Bolivar peninsula in Galveston Bay. Many of these structures were already on stilts in case of storm surge, yet they were nonetheless washed away by a sea swollen to 17 feet above its usual height. Homes that could float, however, might have a better chance of weathering such an event.

This brings up another significant issue for managed retreat and for floating houses in particular. The Urus’ homes are made from local materials plucked from the bottom of the lake or traded for with shore communities. Those being built in developing countries such as Vietnam and Bangladesh are also relatively inexpensive.

The homes detailed above in Europe and America, on the other hand, cost many thousands, or hundreds of thousands, to build, dock, and maintain. Household income per capita (HIPC) in the Netherlands, for example, was almost $38,000 in 2018 compared to about $600 in Bangladesh[1].

The Arkup floating home hybrid. The structure is motorized and can move in placid waters However,
it is also fitted with 40-foot retractable stanchions which can stabilize the home on
the seafloor and raise it above the waves

A floating home recently built on London’s river Thames cost more than half a million U.S. dollars, utterly out of the question for most of those who must adapt or relocate in the coming decades.

A pilot has been underway in low-lying Bangladesh, which has endured nine cyclones in the past eight years and where in 1970 cyclone Bhola claimed some half-a-million lives. Mean elevation above sea level is about 30 feet (9.1 meters). Some “13.3 million people could be displaced by climate change by 2050, and 18% of its coastland will remain inundated by 2080,” according to the IPCC, making floating homes a probable necessity in this battered land.

Brac university in Bangladesh is piloting floating homes for less than $2,000 American, still high by local standards but achievable. To make it workable, the Brac team suggested a standard by which each home “should generate at least enough income through its own food production that families can run the house cost-neutrally. The building materials must come from regional, renewable resources. Energy costs must be kept as low as possible, which requires the use of solar energy and good insulation.”

Brac is also working to float homes along the Mekong delta region of Vietnam. In both cases, as in the Netherlands and elsewhere, “these amphibious homes rise with flood waters and settle back to earth when the flood recedes. In Vietnam the emphasis is on retrofitting existing homes with buoyancy aids, while in Bangladesh entirely new floating homes are designed and constructed with full participation from the community.”

The International Organization for Migration’s (IOM) 2008 report on migration and climate change suggested many nations consider migration simply “a failure of adaptation.” Yet the report made little mention of realistic methods for those facing sea level rise to adapt and remain in place.

Things have progressed however, and the International Panel on Climate Change (IPCC) does note, in its 2019 special report on the oceans, that floating houses and gardens are one of several ‘accommodations’ coastal communities – especially those most vulnerable in Asia – must make, along with better drainage systems, raising houses on stilts, artificially raising land heights, and more. As yet though, relatively little action on housing adaptation is actually underway on the ground – or the water.

Indeed, as the New York Times reported recently, Native Americans along the coast of Alaska and elsewhere are already finding their land under encroachment from rising oceans. Yet the government has, essentially, refused help to relocate their homes and schools. With a median income of around $11,000 per year, it is not possible for these people to relocate without support.

A tethered neotropic cormorant used for fishing by the Uru, on Lake Titicaca, Peru.
Photo by Quinet. Source: Wikimedia Commons

But the world, with a vast population on the brink – and nearly in the drink – must pull out all stops to float many such communities, and with dispatch.

Otherwise, they will be underwater; there is nowhere else to house many of them; and floating homes turn out to be resilient, hardy, and economical. It is an elegant solution to what is soon to be an intractable problem.

With or without tethered cormorants, some of the world’s housing stock will likely be afloat before mid-century.