Algae and the Flip Flop Footprint 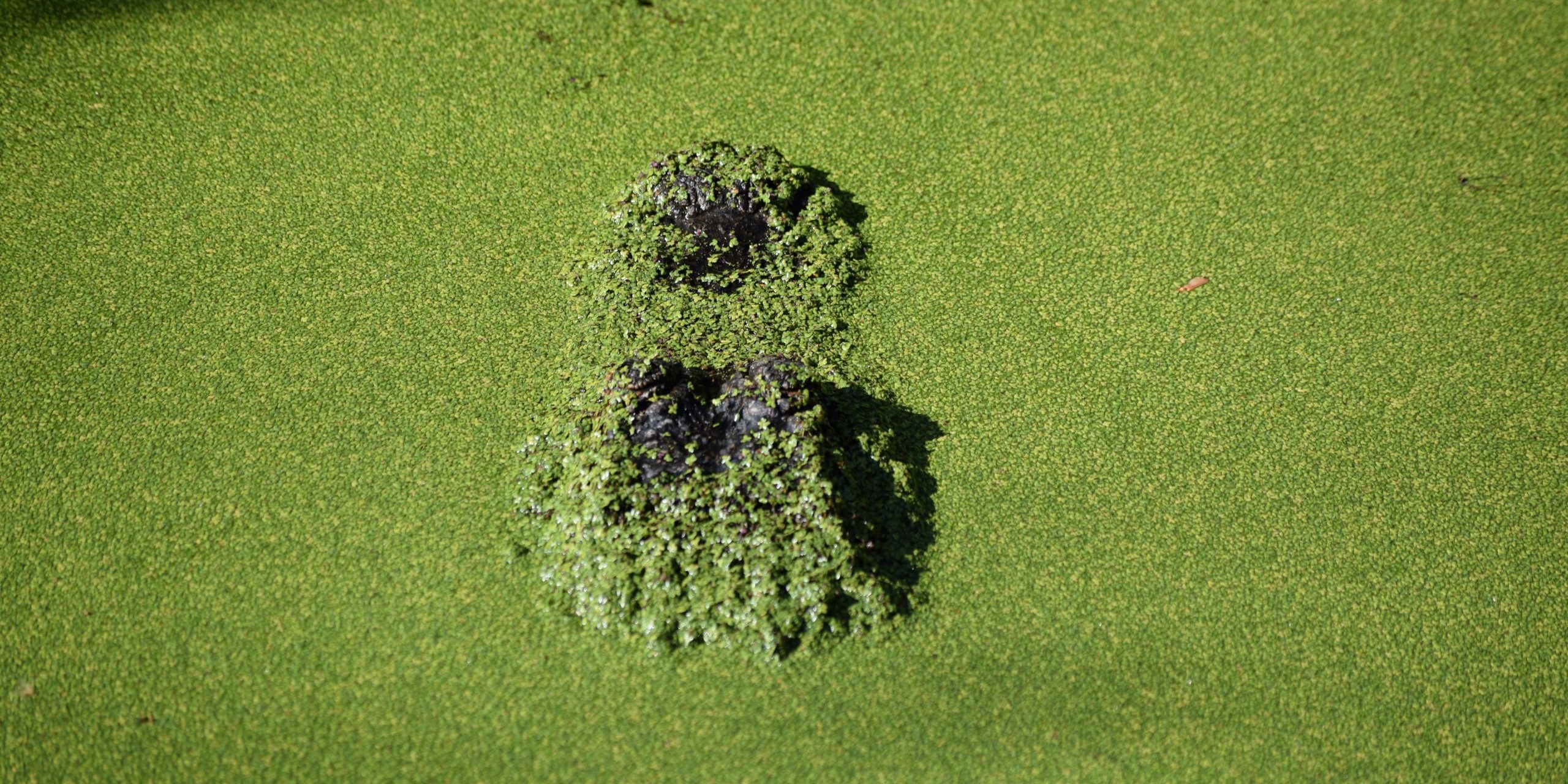 In an election year, having the phrase ‘flip flop’ applied to you is never welcome. But some now embrace being called flip-floppers, because these beach-friendly, open-toed sandals can now be found made from innovative biomaterials rather than the modern standard: plastics and polyurethane foam. Of the new innovations, perhaps the most intriguing are those made from freshwater algae.

Flat-soled sandals with a thong passing between toes are by no means new – specimens date back to the pyramid-building Egyptians, the Parthenon-building Greeks, the Taj Mahal-building Indians, the Coliseum-building Romans, even the Hanging-Garden-tending Babylonians. Modern versions have one very new, and very odious, feature: the vast majority are mass-produced from the aforementioned long-lived, toxic-chemical-laden[1] plastic polymer known as polyurethane.[2]

Algae flip-flops, on the other hand, are made from a fast-growing, wild-harvested, utterly renewable, carbon-storing, injection-moldable life foam that, left to itself, might be choking the oxygen – and hence the life – out of a lake or reservoir through eutrophication[3] if it were not harvested for industry.

If all flip-flops were made from algae, the fact that many see them as essentially disposable wouldn’t cause a problem. Polyurethane flip-flops “may take anywhere between 200 to 1,000 years to degrade,[4] whereas algal soles biodegrade as quickly and easily as the organic plant material they’re made from.

But as things stand, beaches on every coast – from Africa to India to uninhabited coral atolls – have become infested with these discarded relics of the welcome mat.

On St. Brandon’s Rock for example, a lightly inhabited coral islet group in the Indian Ocean, researchers found – among 50,000 general pieces of trash – a hefty 11,000 of such sandals.[5] In fact, these semi-shoes are believed to comprise “up to 25% of ocean plastic pollution.”[6]

Aside from the aesthetics, the petroleum-based plastics and polyurethanes used to make most flip-flops are perilous for marine life, and to humans. The core plastics are toxic themselves, but because the easily flammable polyurethane is usually impregnated with high amounts of toxic flame-retardants, colorants, and more, they are terrible for marine ecosystems.[7]

It’s tempting to think we could just end the manufacture of these sandals but the three billion[8] or so folks who can barely afford shoes at all turn to the humble flip-flop – so called because of the sounds made as they flap up and down from heel to pavement[9] – for their footwear because they are generally so inexpensive.

Many of the countries these people live in have sub-par waste disposal strategies to begin with and once a flip-flop enters a body of water it may travel great distances. The St. Brandon’s Rock study, for example, found “the brand names on the flip-flops… indicate that …this debris has travelled 3,350 kilometres (2,081 miles), roughly the distance from Stockholm to Bagdad [sic].”[10]

It’s probably no coincidence that Professor Mayfield and colleagues first used their algae foam to replace the polyurethane cores of surfboards and flip-flops. They were, after all, working at U.C. San Diego, where beachwear is practically compulsory.

Their timing was excellent too, as flip-flops made of alternatives to polyurethane are clearly called for. A sudden proliferation of traditional materials, not algae alone, are now on the market.

Rice-straw zōri,[13] for example, which started the flip-flop trend when soldiers stationed in post-war Japan brought them back in their duffle bags.[14] Flip-flops made of fair-trade rubber,[15] wood, twine, and even recycled wine corks[16] have been popping up too, but algae has some advantages over most of these.

For one thing it’s among the fastest reproducing organisms on earth – doubling in mass every 3 to 24 hours depending on conditions[17] – making it one of the most sustainable materials imaginable. It can be harvested directly from lakes and waterways where “freshwater habitats are also at significant risk, with algae growth choking and poisoning delicately balanced ecosystems.”[18]

It’s not only biodegradable, but non-toxic. That’s helpful because algae is a natural part of the food chain for animals up to and including humans. One way or another, algal flip-flops washed up on a beach probably won’t be there long.

Some strains of oceanic algae foam up as they die off toward the end of a ‘bloom,’ by secreting a viscous, mucilage-like foam so thick it can actually impede water activities in the area. This substance contributed to the tragic deaths of five experienced surfers in the Netherlands just this year, as search-and-rescue efforts were impeded by foamy surf that coated waves, the emergency teams, and their equipment. A helicopter was used in an attempt to break it up.[19]

Freshwater algae however – though a serious problem when conditions such as nutrient pollution from agricultural runoff cause them to reproduce too quickly[20] – can be harvested easily and made into a polyurethane foam-like material suitable for many applications.

Among those are, as noted, surf boards, the soles of flip-flops and now, parts of many other types of shoes, backpacks, and other athletic equipment, by manufacturers all over the world.[21]

Brands like Adidas, Chippewa, Saola, Surftech, Dr. Scholl’s and many more have partnered with an algal foam company called Bloom whose founder discovered that algae, “when placed under significant heat, pressure, and time, underwent a plasticization process,”[22] and could be similarly extruded and molded like polyurethane. A few years later, they began manufacturing their own footwear before beginning to supply other companies with algae foam.

But algae harvesting goes beyond simply replacing an oil-based product with a natural one. Algae is a critical part of the carbon cycle, soaking up atmospheric CO2 during photosynthesis. When algae is used, the oil it replaces need not be pumped or refined, and the algae both takes up and – once made into footwear – sequesters the carbon for years.[23] In all, according to manufacturer Bloom, algal foams have “40% less impact on the environment than purely petroleum-based equivalents. They also require 35% less energy to process and produce.”[24]

Algal biomass also makes excellent renewable biofuel because it generates “many times more oil per acre than other plants used for biofuels, such as corn or soybeans.”[25] Some algae contains about 50% carbon by dry weight, making it almost ideal for biodiesel.[26]

With flip-flop sales at around 3 billion pairs annually – the pandemic has raised sales recently by some 53% (because who needs shoes when only visible from the waist up?)[27] – lending even more urgency to replacing all that plastic.

If even a strong fraction of these sandals could ‘flip’ to algae, thousands of tons of polyurethane would be prevented from persisting in the environment. No doubt the Pharos and the Greek Philosophers would approve of a flip-flop like that.