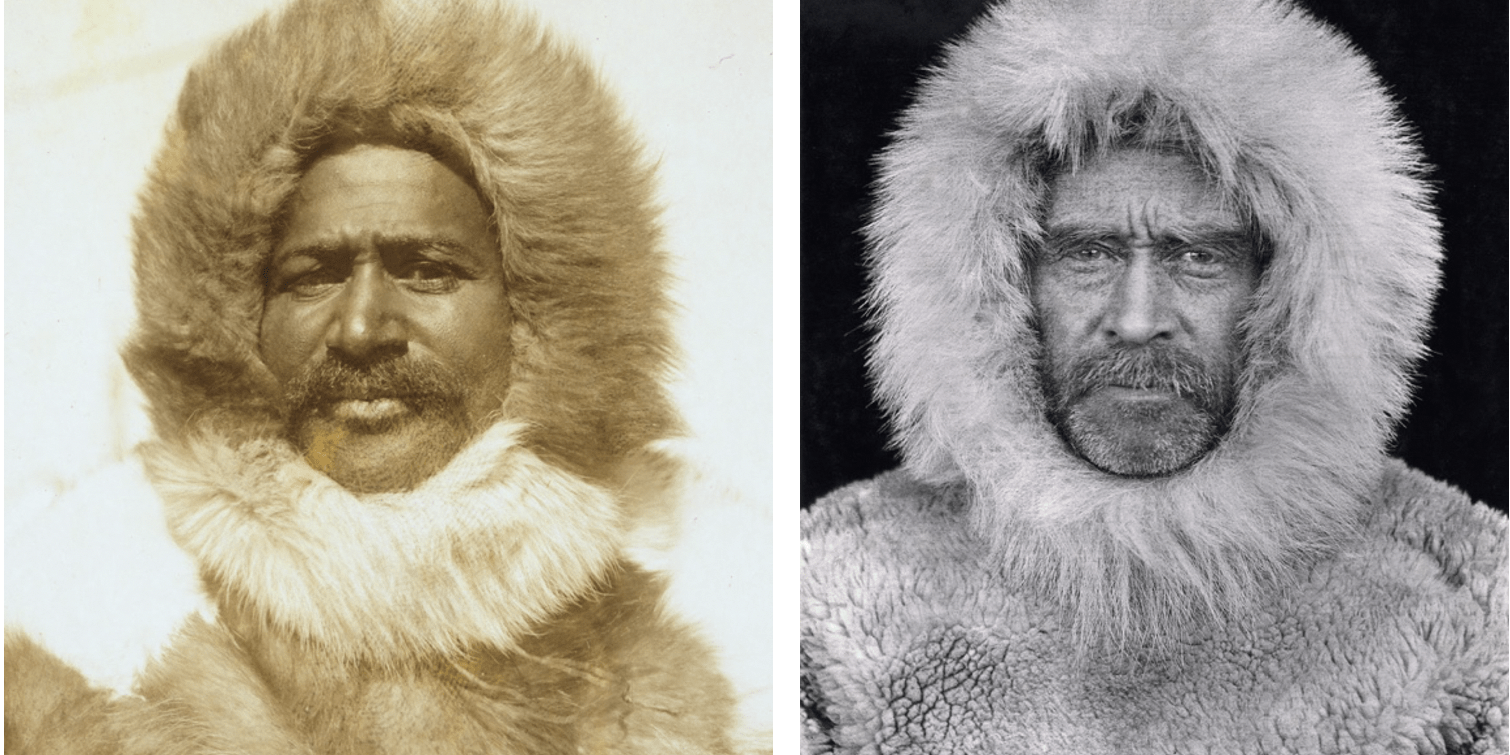 Who first crossed the Arctic and set foot on the pole? Was it Robert Peary? His assistant, Matthew Henson? Or should the credit go to their Innuit companions? To this day, there’s still some charming international disagreement about this matter: it’s one of those disputes that may never be fully resolved.

One thing about the Arctic is not in dispute, however: this summer portions of it rose to the highest temperatures ever recorded there, 100.4˚F (38˚C).[1]

It’s an unheard-of heat wave for an area where, in days past, the ocean could reliably be walked across most of the year and where winter temperatures frequently dropped below -50°C (-58°F).[2]

And, while “annual Arctic air temperature continues to increase at more than double the magnitude of the global mean air temperature increase,”[3] we nonetheless “wouldn’t expect the natural world to generate [such a heat wave] in anything less than 800,000 years or so,” climate scientist Andrew Ciavarella of the U.K. Met Office in Exeter, England, said July 14 in a news conference. It’s “effectively impossible without human influence.”[4]

Okay, so climate change is being directly blamed for the warming, that is hardly surprising. Indeed, the World Weather Attribution Network says such an event is 600 times more likely due to anthropomorphic climate change.[5]

Attribution can also warn us to expect certain secondary and tertiary impacts – what we call submerged impacts – resulting from a heat wave.

For example, a warming tundra greatly increases release of the 1,400 gigatons of methane – an incredibly potent greenhouse gas – currently sequestered in the permafrost.[6]

One tertiary effect of this is an odd sort of land-based acne, made by methane bubbling to the surface and exploding into the atmosphere leaving a massive, circular sinkhole gaping open at the surface. Seventeen of these huge and mysterious holes have welled up since 2004,[7]and scientists have spotted thousands more bubbles apparently poised to burst at any time.[8]

Another effect, the thawing of what was permanently frozen ground, caused the toppling of a huge Siberian fuel tank and the subsequent leak of an enormous plume – about 20,000 tons – of diesel fuel into the Ambarnaya river ecosystem,[9] a spill that could be seen by satellite (see image, above).

It is possible to drill down this cascade of impacts even further to a Siberian anthrax outbreak on the Yamal peninsula – well above the Arctic circle – four years ago. The likely cause is believed to be an infected reindeer carcass, frozen and buried in permafrost decades ago, that had thawed due to rising temperatures.[10]

Warming temps also herald a far greater likelihood of wildfires and, indeed, these were raging out of control in Siberia this year – including “peat fires [that] can burn longer than forest fires and release vast amounts of carbon into the atmosphere.”[11] Aside from direct damage to forests, animals, and property, such fires give rise to plumes of ‘black carbon’ particulate which has damaging downstream implications of its own.

So while climate change per se is a global phenomenon and its major impacts can be generally predicted, its Arctic local effects – an oil spill, an anthrax outbreak, a series of small craters, and so on – cannot.

But are even these events truly ‘local’ in the jurisdictional sense?

The Arctic is not a single perfectly defined area, and definitions differ, but all agree it passes through several national jurisdictions: through Greenland, across Canada from Baffin Bay to the Beaufort Sea, slicing through Alaska, jumping the Bering Strait, and bisecting the vast expanse of Northern Russia from Vladivostok to Murmansk. It then whisks across the Norse countries, misses or encompasses Iceland depending on the map,[12],[13] and comes full circle to Greenland once more.

The same is true of the open oceans and of an entire continent: Antarctica.

Yet when a hurricane damages Florida, there’s a fairly clear understanding of the agencies, governments, insurance companies and individuals involved in the cleanup. U.S. federal, state, local agencies, local insurance purveyors, and local individuals and businesses. But how do we protect the Arctic, when that name merely represents an idea, a circle of latitude?

And who is responsible for dealing with a mess or disaster when the event is outside the 3-mile limit or crosses international boundaries? In the Arctic’s case, this is a highly complex question.

Cooperation
On an ad hoc basis there has been significant – if non-binding – cooperation between the Arctic nations.

As Edward Alexander of the Gwich’in Council International Circumpolar Wildland Fire project, noted last month, it’s “important to make sure that fire and smoke are not the only things crossing national borders. Our knowledge, cooperation, resources, respect for each other and our commitment to mutual aid should also be trans-boundary.”[14]

A body called the Arctic Council helps facilitate cooperation on many cross-border issues.[15] It is comprised of the 8 Arctic landowning nations – Russia, Canada, the United States, Sweden, Denmark (including Greenland and the Faroe Islands), Finland, Iceland, and Norway – along with the 40 indigenous communities representing about a million people, and several European and Asian states who ‘observe’ deliberations.[16] The Council forms working groups and disseminates information and policy briefs, but it is not clear how sharp its teeth are.

Some four million people live above the Arctic circle[17] and, while any given town or village may be within one nation or another, the communities they belong to may not. An estimated 80,000 – 100,000 Sámi, for example, range through Sweden, Norway, Finland, and Russia.[18] Because of this, and because Arctic inhabitants’ livelihoods generally center around local resources, their input is critical to the Arctic Council.

Given the massive challenges about to face the Arctic, and the thorny international questions that must be resolved, it would be well to have solid, binding cooperation and strong leadership. And here is the truly profound submerged impact of climate change: the warming globe has caused the polar ice to recede, thus opening the Arctic for commercial interests that are likely to increase the warming effect.

One example is the Northwest Passage – lodestone of explorers like Cartier and Hudson – which is now open far more often. This route has cut more than 1,000 nautical miles (1,852 kilometers) and up to 4 days off the passage from Atlantic to Pacific.[19] A time and distance – and therefore fuel – savings like this will attract a good deal of shipping, including tankers too large to get through the Panama canal.[20]

But who owns or controls the route? Canada firmly asserts that the passage is strictly their affair,[21] but other countries – including the United States, Denmark, Japan, Norway, the European Union and, especially, Russia – have expressed increasing interest in the region and are making differing claims in relation to international law. The U.S. Secretary of State recently called that claim “illegitimate” and tensions have risen.[22],[23]

As this makes clear, claims on the Northwest Passage are likely to be highly contested.

There are also military implications, with numerous nations – who are not necessarily friends – sending submarines.[24] and warships[25] through slender and shallow shipping lanes. This is another reason the importance of open waters in the Arctic is clear even if who controls those waters is not.

Another issue is the contested control of the Voronovsky Ridge and other resource-rich areas. About a quarter of the world’s remaining untapped oil and gas reserves – some 90 billion barrels of oil, 1,669-trillion cubic feet of natural gas, and 44 billion barrels of natural-gas liquids[26] – lie below what was perpetual snow and ice but is now open water.

The United Nations Convention on the Law of the Sea (UNCLOS) “gives coastal states a 200 nautical mile continental shelf claim that allows countries the right to exploit resources in the seabed and subsoil of their respective areas,” including fishing, oil and gas extraction, and mining.[27]

Yet even here things are murky. The treaty specifies rights from the end of the continental shelves – and there are at least three continents involved in the Arctic[28] and there’s a lot of lively discussion about where those shelves actually end. Heck, geographers can’t even agree on how many continents there are![29]

Though the long-term future of oil and gas fuel is uncertain, there is already complex maneuvering for these resources that have lain untapped beneath the ocean floor for so long. The U.N. Shelf Commission – yes, there is a commission on establishing the outer limits of continental shelves – must approve applications for various nations’ claims, some of which have already been accepted.[30] Whether those rights will remain undisputed is an open question.

We may never settle which man first set foot on the North Pole, but we must quickly settle the issues facing the Arctic today. The decisions made in this region over the next few years will have a major impact on our race. We know who those decisions will affect – all of us – we just don’t know who will make them.