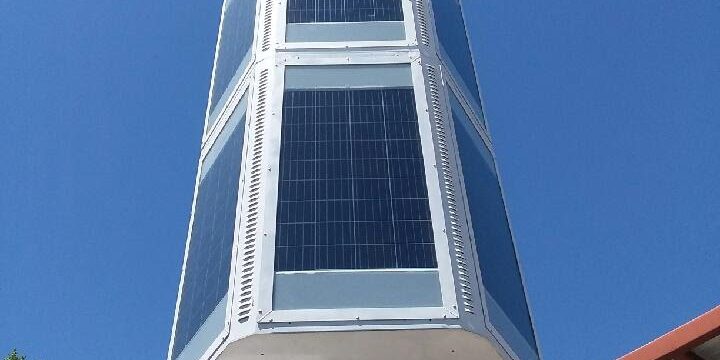 [Part 1 in our 2-part series on vertical solar.]

In case you were planning to calculate how much surface area it would take to power the entire world with solar, don’t bother: back in 2009, someone at Land Art Generator beat you to it.[1] The answer? 496,805 square kilometers (191,817 square miles).

That friends, is a lot of solar panels.

But how big is 500k kilometers2 really? According to these guys, the uninhabited portions of the Sahara alone – some 9 million km2 – is 46 times the area needed for the planet’s energy needs by 2030.

Then again, they say, if panels were rolled out as fast as rainforest is being burned for industry – 170,000 sq kilometers every year,[2] the project would be finished in only 3 years.

Okay, so clearly there’s enough sunny real estate available globally to more than get this done but even so it’s probably not likely we’ll blanket such enormous areas with a PVs. For the time being we need as much solar as possible in the minimum amount of room. The best way to achieve that would be to improve the power generation of solar panels and to allow more panels in a smaller space. How can we get there?

The answer appears to be simple: go vertical.

Going Vertical
This is not about the efficacy of laying standard rectangular panels upright versus lengthwise. This is about upright solar innovations that are radically different from – and take up far less space than – garden-variety solar farms, and may well revolutionize the industry in a few years.

One of these, building-integrated photovoltaics (BIPV) and building-adapted photovoltaics (BAPV) take ‘vertical’ to a whole new level – all the way to the top of steel-and-glass skyscrapers – and is so critical going forward that it’s the subject of our next story.

Another, and our topic here, is any of several innovative vertical solutions involving free-standing, upright PV structures that both require less room and generate more power than their reclining cousins.

One example of this thinking-outside-the-frame is the new ‘vertical polygen solar tower,’ unveiled in Los Lunas, New Mexico this June.

A village called Los Lunas – the moons – is admittedly an odd one for testing a device that runs on sunshine, but this 6-sided tower – built by New Jersey-based startup Wiltech Energy – packs 20kW into 4.5 square meters (49 sf)[3] and is topped by a bladeless wind turbine for additional power and generation during times of low light. A 22kW storage battery is included to keep power flowing continuously.

Designed to power the village’s recycling facility, the polygon approach is a radically different type of panel structure which involves a number of small panels set in vertical tiers at different angles in such a way as to gather light no matter where the sun is relative to them.

The other key to vertical is the way the angle of sunshine interacts with the PV materials. Flat panels are generally laid out in series and raked to specific angles depending on planetary coordinates. In Arizona, for example, “south-facing panels with a 57˚ tilt” are called for, whereas in Minnesota a range of 22˚(summer) to 68˚ (winter) is optimal.[4]

Horizontal panels, whether ground or roof based, are raked to catch the sun when it is directly overhead, and fall off considerably in output earlier and later in the day. Vertical panels, on the other hand, capture light far longer and continue to produce even as the sun is on the horizon.

The polygon structure does the same by capturing light more directly from east to west and – as each of the six sides is vertical – for longer than is usual. Such light is largely lost to standard panels, which thrive on overhead light but fare poorly at other times. In addition, the panels are hung on masts for maximum exposure and this allows more panels to be stacked on top. The whole contraption takes a fraction of the land space – about 4 square meters – so land costs would be lower.

But this doesn’t tell the whole tale. Horizontal panels, wherever they’re placed, lose power when all or part of their surface becomes obscured by dust, dirt, pollen, sand or snow. Such panels may be covered in snow for weeks or months while, in desert regions such as the Sahara mentioned above, or even the New Mexican landscape near Los Lunas, sand and dust storms pose a serious problem.

Complex equipment has been developed to clean them adding a fortune in time, money and that most precious of desert materials, water. Considering our original premise, powering the world by solar alone, cleaning half a million square klicks of PV is a truly Herculean task.

And the multi-sided approach means the sun has more surface to impact as it courses from sunrise to sunset and throughout the seasons. In addition, the vertical polygon approach is stackable… the taller the mast, the more panels can be loaded on[6] so ever-more kilowatts can be added without needing additional real estate.

As Wilson told Valutus, his inspiration to build vertical solar was looking up at New York City’s skyscrapers one day and realizing their height created more space while actually saving precious room on the ground.

Indeed, “Wilson says his system can generate two megawatts of electricity in a one-acre area, compared with just one megawatt in a 4.5- to 5-acre area with horizontal systems.”[7]

“We believe this technology will change the way solar power is delivered,” Wilson continued.”[8] These systems are listed as “grid-tied, off-grid or a combination of both and scalable,” according to Wiltech’s website, and the Los Lunas power unit is closed circuit, neither taking from nor feeding into the grid.

It’s also the first of its type deployed commercially, so all eyes are on it awaiting results. If it is successful, we will see more power requiring less real estate… and more work for the guys who like to calculate how much solar is needed to power the planet.

3D Solar Towers
Meanwhile, in 2012 an MIT working group designed a truly radical prototype that uses conventional PV materials technology but, like the polygonal towers discussed above, configures them differently for the purpose of “collecting solar energy in three dimensions,”[9] as opposed to overhead light striking a single flat panel.

Placing double-sided squares of accordion-folded PV materials in a vertical frame – with or without external cuboid scaffolding – the researchers found these babies were capable of generating “between 2 and 20 times” more output than traditional materials.[10] Twenty times? Jumpin’ generators!

Like their polygonal cousins, the key to these solar towers – which resemble the compact disk racks of old – is not better materials, it is simply about capturing far more sunlight and for longer.

“By going vertical and collecting more sunlight when the sun is closer to the horizon, the team’s 3D modules were able to generate a more uniform output over time. This uniformity extended over the course of each day, the seasons of a year, and even when accounting for blockage from clouds and shadows,” noted New Atlas [11]

When tested on an MIT rooftop for some weeks, the researchers confirmed the folded materials could make energy at lower solar angles.

And, according to Wiocor Energy, which has now commercialized this design, the panels also receive a “boost from reflected and diffuse light” that flat panels can’t use.[12] In other words, once light hits a flat panel, some is absorbed and some bounces off and is lost. With stackable panels on the other hand, light reflecting from the ground, and light bouncing off panels above and below, can be absorbed by another panel, thereby raising the level of power these stands can generate.

As with the old image of humanoids learning to stand upright, vertical just might be the next step in the evolution of solar.