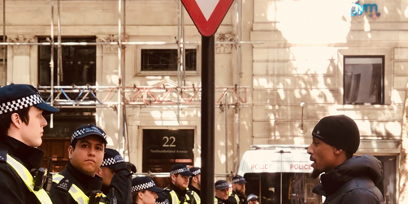 I was only five, but I remember the hunt for the bodies of Schwerner, Chaney and Goodman after the Freedom Summer murders in Mississippi in 1964. I recall watching the search on TV, my parents’ anguish, how sickened they appeared. A local Black man and two Jewish men from New York City had gone missing, abducted it appeared, and believed dead.

The two Jewish boys, we learned later, were shot at close range and buried under an earthen dam. The young Black man, James Chaney, appears to have been buried beside them while still alive. It was the first time I knew anything about racism or its effects.

I didn’t know it then, but the lynch mob that killed them was composed of “members of the local White Knights of the Ku Klux Klan, the Neshoba County Sheriff’s Office and the Philadelphia (Mississippi) Police Department…”[1]

That was 56 years ago. And here we are again.

The three young men were working to register Black people to vote as part of the civil rights movement. They were doing extraordinary things and were killed for it. But the lives of those whose names we’ve heard intoned like a litany, a dirge these past few weeks, were Black lives casually taken as they jogged, played, slept in their beds, snacked, barbequed in their own backyards, sat in their living rooms and their cars, or did any of the other quotidian things all people do.

James Chaney’s name, and the names of hundreds of others, belong among them.

Last week, as we all know, soldiers and police were once again out in force – and using force – in the streets of a dozen major American cities. This time, as we all know, the dam burst under the shock of watching a police officer slowly, painfully, and seemingly indifferently, snuff out yet another Black life. Crack!

There were no pointed hoods, no abduction in the dead of night, no attempt to hide the evidence. This one happened in plain sight, in daylight and in front of witnesses, by officers in full uniform.

For 8 minutes and 46 horrifying seconds onlookers tried to intervene in the death of George Floyd while three other policemen looked on.

Despite a constitution touting equality, far too much of the U.S. – and global – economy has been built upon a substrate of injustice, wealth inequity, and racism, all of which have been on full display since George Floyd took his last, tortured breath.

In fact, members of the U.S. armed forces had to be told, last week, that it is inappropriate to display the battle flag of a group whose goal was to continue and perpetuate a slave-based society.

Crack! A torrent of boiling, raging, furious magma was released onto the streets in the form of grief, rage, peaceful protest, sometimes even violence, as bottled-up emotions exploded into full view. The country saw, in raw, unequivocal terms, that to those policemen the Black life of George Floyd did not matter. But it did matter. It does matter.

This is not the piece anyone wants to be reading or writing. We want to read about how we’re solving the pandemic, and how we’re making progress on climate change, and about a new innovation that may be the answer to our power needs, or anything other than the news that this week yet more unarmed Black men have been shot by police or were found hanging under mysterious circumstances.

We have a global virus and a global climate emergency and without unprecedented action at unprecedented speed, they will overwhelm us. But we can’t do so right now, when there are armies in riot gear breaking up legal protests rather than an army working to save the coastlines, working to move the hundreds of millions who, as we report in R.O.I. this week, will have to relocate as the seas inundate their communities.

The one ray of light is that very thing: the speed and scale with which we now know the world can act together to tackle major disruptions.

There is one other thing that is different this time. This time there are marches around the world. White people. Brown People, in dozens of countries, all marching, all demanding justice, all committed.

My daughter is the same age I was when Schwerner, Chaney, and Goodman were killed. She has seen me watching, and she has seen the anguish on my face. She is the child of two races, half Asian, half Caucasian. It is impossible for me not to wonder if she will be writing something like this in 2076, when she is the age I am now.

We cannot go on like this. Black lives matter and our society can’t be truly healthy until everyone in it understands that. Until no one needs to be told the Confederate battle flag has no place outside a museum. That flag, of course, hung over a short-lived confederacy founded “upon the great truth that the negro is not equal to the white man,” according to that entity’s Vice President.[2]

We can fix this, and we must. The climate is not holding still while we confront our demons. There are matters at hand that require the attention, and the best efforts of all of us. This could still be our finest hour. It could be.

I won’t be around to see what my little girl, Kailin, has written some half-century hence. I can only trust it will be the story of how we saved the planet and warded off pandemics and of how she saw the Confederate battle flag somewhere, a relic, as she wandered in a museum, and wondered what it represented.

References
[1] Wikipedia, Murders of Chaney, Goodman and Schwerner
[2] The ‘Cornerstone Speech’, from an address given in in Savannah, Georgia, by Confederate Vice President Alexander H. Stephens on March 21, 1861