A Forest on the Corner: Moss, CO2 and City Trees 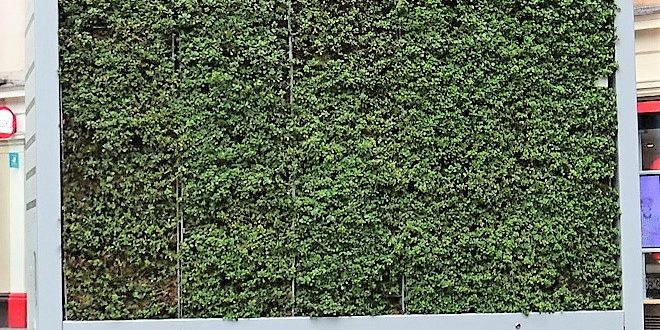 Last year we reported on moss being used to clean, purify, and sanitize swimming pools and industrial cooling towers, thus dramatically reducing or replacing thousands of pounds of industrial chemicals which would otherwise have entered the waste stream.

It turns out that this miraculous stuff does the same thing for our air.

There are approximately 12 thousand species of moss and many of them, to one degree or another, harvest CO2, fix nitrogen, pull many other toxins, particulates and heavy metals from the air and, crucially, give off oxygen just as their arboreal relatives do.

If this were just a scientific exercise, well and good. But air pollution is one of the worst health disasters ever to hit the human race – with between 7 million – 8.8 million dead and many millions more sickened annually. A simple, abundant, and low-maintenance living agent that can remove carbon and manufacture clean air in place of trees – where and when the problem hits hardest – is exactly what we need to combat our own fouling of the air.

In case you’re skeptical that a little moss could impact our atmosphere to any significant extent, there is a body of scientific evidence indicating that ground and marine mosses were the proximate cause of an early ice age – and the mass extinction that went with it.

Around 35 million years after true plants – such as mosses and worts – first appeared, an ice age and its concomitant mass extinction occurred. The mosses apparently did this – according to University of Exeter scientists – by bringing atmospheric CO2 levels down from “22 times modern levels to just eight times modern levels. That was enough to trigger an ice age in the model of Ordovician Earth,” according to this theory. This, we’re told, is how our polar ice caps formed.

Okay then. Lower carbon levels, nitrogen fixing, adding oxygen, cooling and moisturizing, taking up very little space due to their cell-thin-leaves’ massive surface areas, and a vacuum for airborne pollutants and particulates. Where, oh where, can we get some of this stuff?

Well, there is a device popping up in perhaps twenty cities around Europe – known as the City Tree – that its maker claims can take up the same amount of carbon as 275 trees, or 5.5 acres of forest. A forest of that size also provides almost 650 kg of oxygen, and we would expect such a device to do the same.

Five-and-a-half acres of forest may not sound like much but it can suck up nearly 23 metric tons of CO2 annually.[1]

Now, it may be desirable to plant five acres of forest on a street-corner in Delhi or Bangkok, but it is certainly not practical. With the exception of shade, a City Tree tower can have the same impact in an area the size of back-to-back park benches. In fact, they’ve installed benches on several models of these towers: even without shade, it’s cooler near respirating mosses, as noted in the ice-age model above.

These towers are self-contained – having a solar panel above and a well for rainwater to feed the moss – so they require little maintenance. They also contain advanced sensors and instrumentation for data on local temperature conditions, air quality and how well the unit is working.

Why is all this important? Well, consider that New York City holds about “29,000 acres of parkland and urban forest” in all – including parks, sidewalk trees and wetlands. Using the metric above, that’s nearly 122,000 metric tonnes of carbon removed each year!

At that rate, about 5,200 of these devices would be needed to equal the carbon reduction of New York City’s woodlands, not to mention adding 3,375 metric tonnes of oxygen.

New York, of course, has been living under the EPA and Clean Air Act for decades, and has excellent air quality when compared, say, to Gurugram, Faisalabad or Hotan – numbers 1,3, and 8 respectively on the World Economic Forum’s list of the most-polluted cities in the world.

But clearly that’s not enough. And many cities do not enjoy the tree and plant cover that New York does.

That is a tidy sum. Yet in 2018 New York State announced improvements to the Nassau Expressway costing…you guessed it, $130 million to repair a roadway.

Even in countries such as India, which houses the majority of the world’s most-air-polluted cities, such projects can be done. A $400-million sustainable development project is currently underway in Tamil Nadu state.

Ho Chi Minh city is building a subway for an estimated $2.1 billion. In cities like Cairo, Delhi, Hanoi, and hundreds of others, such a device could potentially reduce carbon and increase oxygen dramatically without the need to plant and maintain millions of trees. The cost would not be low but the cost of unhealthy air isn’t low either. And, of course, we’d expect the cost of City Trees to fall as production volume increased.

Investments in large-scale carbon-capture technology are expected “to reach more than US$ 5.6 Bn by the end of 2026,” according to Fortune Business Insights, and City Tree is a simple, natural, modular and attractive carbon capture device, requiring no chemicals, little maintenance or machinery, just..well, humble prehistoric moss.

This is the type of solution we like. That is, in part, because it directly addresses one of the most challenging problems of our time. But also because it does so simply, and can be placed just where the problem is at its worst for immediate support of the populace and planet.

We need more trees, no doubt about it. But until we plant them, and until they grow, and until we’re sure we have enough ground water left to support them – hello, Chennai – then something immediate, self-contained, and small enough to fit in the space currently used by a couple of mailboxes, such as City Tree, is an elegant solution.

References:
[1] A healthy forest acre holds, conservatively, about 50 trees, and that acre can take up about 4.2 metric tonnes of CO2 every year, equal to about 26,000 miles in an average gasoline-driven automobile