30 for ’30 Megatrends: Turns Out Climate Change is on Top 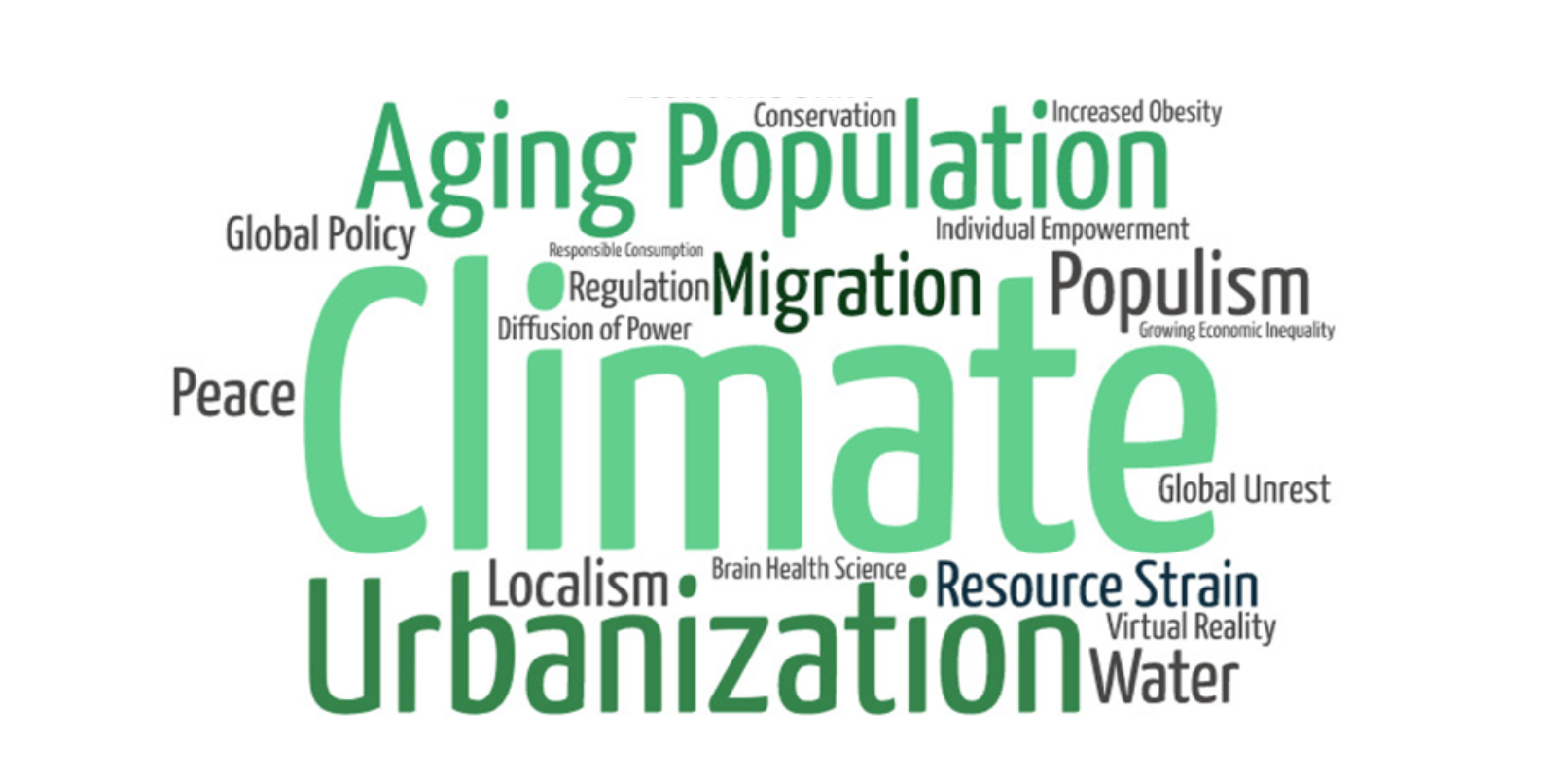 It comes down to this: if you and your company are not thinking about, planning for, defending against, and leveraging the megatrends that are manifesting this decade — using them to set the safest, strongest course — then your entire strategy is at risk.

These things are absolutely going to matter in the runup to 2030 and beyond. A strategy aligned with these megatrends can make your voyage a success. Failure to heed them just might put you on the rocks.

At the same time, figuring out which trends are rising and which falling within a dynamic landscape can be difficult. “In this environment, forecasting has become almost impossible – change is no longer linear but exponential,” notes Roland Berger.*

Perhaps, but at least we can keep a weather eye on the crucial trends that may affect us, and our organizations. We can see what is happening, assess the risks, and watch closely what others are paying attention to — and planning for.

Now that 2020 is here, and the engines driving climate change — including the risks and opportunities associated with them — are clearly understood, the notion above is even more critical than before.

Now, I have believed for years that companies who failed to consider climate change as a critical trend — and a major-league risk — were not planning effectively. But that’s me, and I’ve been working in sustainability for 25+ years.

What about organizations that aren’t in the field? They may have other ideas, based on their own unique mission and experience. How much weight do they actually give to sustainability and climate change? Which megatrends are they following?

I decided to find out, and set our research team to look at what thirty large and influential organizations — think tanks, corporations, government agencies, consultancies, and more; across sectors and around the world — were thinking.

In this proprietary 30 for ’30 Megatrends survey, we searched for and compiled what these sources see as the biggest and most critical trends for the next decade.

We intentionally leaned towards organizations that were not sustainability-focused — 90% of the entities we included were not related to sustainability.

Yet climate change took the top spot as the predominant megatrend. That in itself is fascinating considering the broad scope of these sources: military and civilian, strategists and accountants, forecasters and governments, and more.

The U.S. Office of the Director of National Intelligence, for example, has said climate change, “These changes… will have direct and indirect social, economic, political, and security effects,” including impacts on agriculture, migration, infrastructure, supply chains, and beyond.

Financial services firm PwC, the Rand Corporation, the U.K. Ministry of defense, and others just as diverse, also had the changing climate high on their lists.

As different as these organizations’ perspectives were, however, as a group they saw issues related to sustainability as shaping the world over the next decade. Here are a few examples:

#1 Climate change, which underpins many of the other trends on the list

#3 Urbanization, which is forecast to increasingly become a function of climate change. Coastal areas face challenges, desertification and groundwater issues move people off the land, and many other submerged effects of changing conditions swell our cities

#6 Resource scarcity, too, is clearly a partial function of higher global temperatures. Water. Food. Power. Trees and forests. Species. The climate is going to dramatically alter these in the coming decade. Worldwater’s ‘Water Scarcity Clock’, for example, keeps a running total of humans living in water-scarce areas, currently above 2.36 billion. They expect that will rise to 2.7+ billion by 2030.

And let’s not forget #10, mass migration which, while historically a function of war, persecution, or economic conditions will increasingly come from climate-driven sources such as those noted above. In fact, the 2018 World Bank report, Groundswell: Preparing for Climate Change found that, without drastic and concerted action, around 143 million people will be displaced within their own country’s borders by mid-century, “to escape the slow-onset impacts of climate change.”

Thus, four of the top ten issues these 30 major organizations see as megatrends relate directly to sustainability. But the results held another surprise.

Our survey showed that climate change was top-of-mind for a wide variety of organizations most of whom had nothing directly to do with sustainability. That means any company’s strategy may founder if it doesn’t include the biggest force driving the world we’ll see in 2030. That’s a problem.

And not just for you: it means your entire company probably has a blind spot. Most people pondering the largest global megatrends imagine that sustainability is somewhere on the list. But now we know where it should actually be placed: right at the top.

If you or your organization hasn’t already positioned it there, you are navigating from the wrong chart and that, too, is a problem.

Munich Re, the world’s largest reinsurance firm, also sees climate change as a core concern moving into the 2030s and — raise your hand if you see another trend forming — has been refusing to insure some Big Carbon producers.

As their chief climatologist — notice that they have one — told The Guardian last year, “if the risk from wildfires, flooding, storms or hail is increasing then the only sustainable option we have is to adjust our risk prices accordingly. In the long run it might become a social issue,” meaning people and businesses with lower incomes may not be able to afford insurance at all.

This could be a game-changer for the social fabric, and for companies and systems dependent on solvent families and businesses in order to thrive. Homes, small businesses, land in a flood or wildfire zone, or a business model based on carbon, may shortly be uninsurable.

On the other hand, companies probably want more than to simply compete. They want to do something good for the world, to work in alignment with the U.N. Sustainable Development Goas (SDGs), to be leaders in resolving the worlds ills.

Clear and penetrating understanding of megatrends can allow these organizations to be more, to do more, to have a catalytic effect. As we’ve noted many times, companies who lead on sustainability are the ones who drive innovation, and thrive by placing their values out front.

It is interesting that the World Economic Forum’s risk-trends assessment also lists Climate Change as their top issue, with an eerily similar list of corollary risk factors.

This point should not be lost on any of us: the very opportunities afforded by these trends when properly planned for, present a nearly identical set of risks when they are not. Whether you end up stuck on a reef or with a strong breeze at your back depends on how well these megatrends are embedded in your strategic plans.

To learn more about our 30 for 30 megatrend original research, and how best to apply it, contact us or email me directly.

* Roland Berger was one of the sources surveyed in our 30 for 30 research.