So That’s Where it Was! 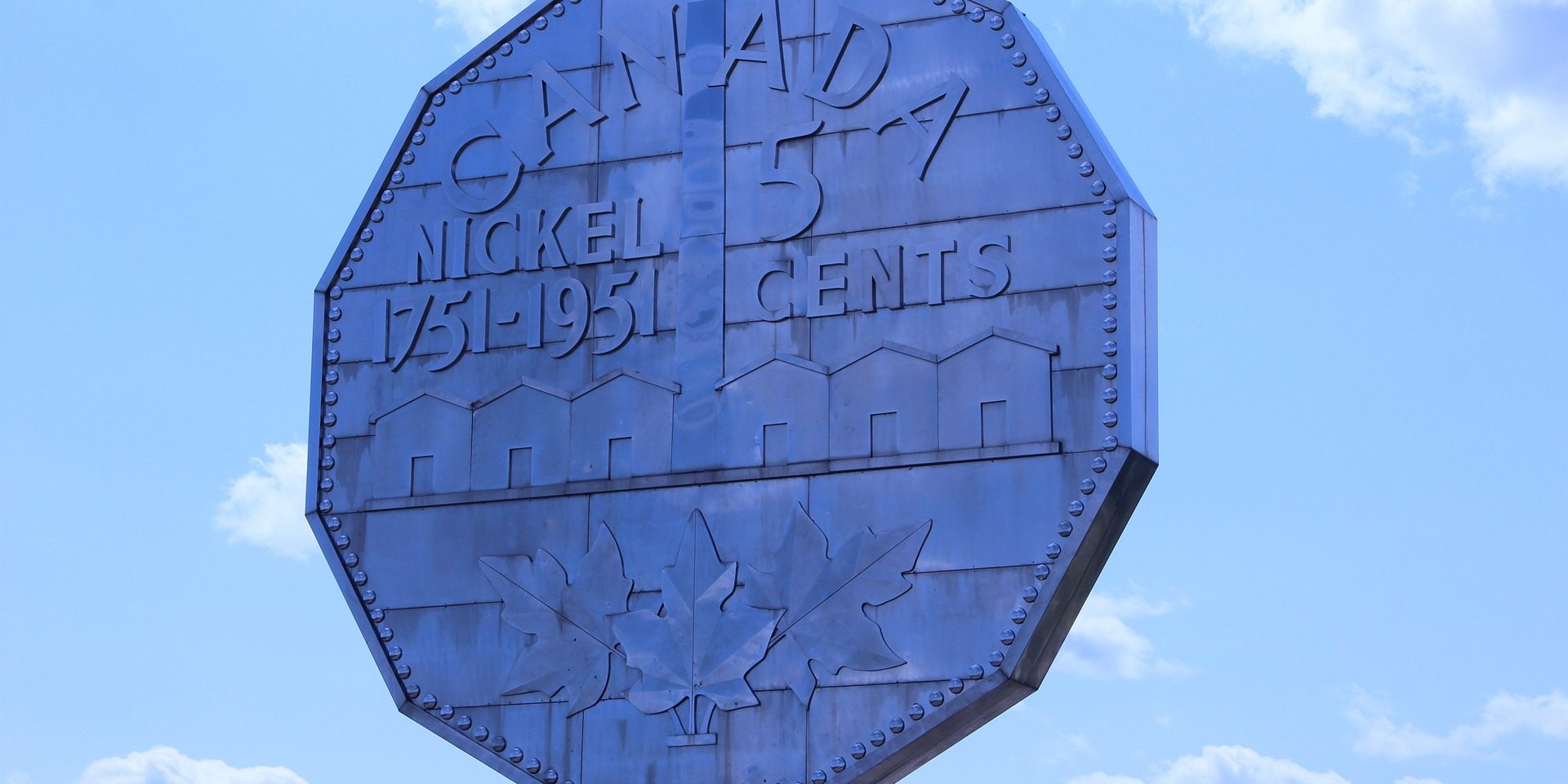 The Big Nickel, Sudbury Ontario’s best-known landmark. At 30’ high (9.1m) it was, and remains, the world’s largest coin. The stainless-steel nickel was unveiled in July 1964, 11 years before I hit town. It has since been moved and reseated on stanchions. It was impressive, certainly, and memorable. Photo by The Nita / Pixabay

I once spent a month going cross-country via Greyhound. New York City to Toronto, and thence across the broad expanse of Canada to Vancouver, courtesy of Greyhound’s brand new unlimited travel Ameripass program. Ninety-nine days for 99 dollars, anywhere in the U.S. and Canada.

I made full use of it, skirting the great lakes, then across the prairies and up, up, up to Banff and the glorious Canadian Rockies before nestling, happily, in Vancouver’s pristine embrace.

Down the rocky Pacific coast a week later to San Francisco and a night at the Wharf, turning the last streetcar of the night by hand, and eastward now, through the wide-open west to Amarillo, then across the Mississippi in the dark, and on homeward through the Blue Ridge and up the East coast, home at last.

Buses are somewhat unique in that they wind through otherwise untraveled hamlets and stop in front of Dime stores in every small town. I began by keeping count of the ‘Main Streets’ and ‘Broadways’ but quickly gave it up — every town had at least one.

A day out from Toronto, north of Lake Huron, we found ourselves in the center of a town I’d never heard of. The bus pulled up with the usual wheezy exhalation of brakes and the doors sighed open.

“Where are we?” I asked my seatmate, as he shook me awake. He pointed and, following his finger I saw a huge, enormous Canadian nickel, raised on a pedestal, dominating a nearby hill.

“Sudbury, Ontario”, he replied. “Armpit of the Universe.”

“Why?” I asked groggily. “I mean, why is this the armpit, specifically?”

His answer was lost in the rush for hot coffee and restrooms. But now, with apologies to the inhabitants, I may have an answer. The story is a common one in the broad brush of its unforgiving and unsustainable history, but so uncommon in its severity, that it’s worth detailing here. There is also good news, too, in that the city is apparently working hard to restore its habitat.

It begins something like this: In late 1849, Ojibwe natives objected to the Quebec and Lake Superior mining Companies’ operations on their own land, and asked to have their resources back or compensation for same. In a familiar refrain in such cases, “The government… was not willing to provide compensation for valuable mining locations, nor participate in any negotiations – a refusal which flew in the face of Indigenous law and the Royal Proclamation of 1763,” notes Sootoday.com

Some of those Algonquin Ojibwe attempted to disrupt the mine’s activities, in what is now known as the Mica Bay incident.

The ‘incident’ ended, inevitably, with several of the Indian leaders arrested. Treaties were quickly effected along Lake Superior and Lake Huron, in which the British Crown became the new owner of what had been Algonquin Ojibwe land for an estimated nine-thousand years — since the Wisconsin glacier melted[1] after the last ice age.

In exchange for the land, “the Crown pledged an annuity to the First Nations people, originally set at $1.60 per treaty member and increased ‘incrementally’,” the last such increment being in 1874 and bringing the annual sum to $4. per member. That remains the number today. (Sigh.)

In the early 1880s, the huge pine forests attracted some 11,000 loggers and a railhead was established, bringing yet more Europeans to the area for railway work. Blasting for the railroad revealed more rich mineral deposits — specifically nickel-copper ore — and hastened yet more settlers.

The establishment of roasting yards was, it seems, the coup de gras. These were giant pits laid with pine logs over which was poured raw ores. The pine was lit to reduce the ores and, “about 250,000 tons of ore would burn in 100 heaps. After the lighting, the wood burned in about 60 hours. The pile would continue to burn for approximately three to four months,” giving off sulfurous steams that affected man, beast and plant. [2]

“Between 1913 and 1916,” notes Active History, Canada, “the Mond Nickel Company removed all vegetation from the Coniston area to provide fuel for the roasting yard.”[3] Over the next forty years, “100 million tons of sulfur dioxide gas was emitted from the ores, which severely impacted the health of Sudburians and had catastrophic impact on the natural environment.”[4]

In combination with massive open-pit nickel mining throughout the nineteenth and much of the twentieth centuries, “the loss of vegetation in the Greater Sudbury area has caused soils to erode into watercourses, degrading… streams and rivers. This degradation continues today in areas that still have poor plant coverage.” This was true over more than 82,000 hectares (202,600 acres / 820 sq kilometers.)

A group that manages the city’s geological and educational tours takes visitors to the ‘superstack’, a 1,250 ft (380 m) chimney, the second tallest in the world, located atop the Inco mining company’s smelting facility. The tour encompasses enormous fields made of mining slag poured, semi molten, to form a new surface, a sort of man-made volcanic field.

Beyond that, “as mining, stripping, sintering, and smelting operations increased with world demand for metals, Sudbury’s landscape began to look like a barren moonscape. The mining and processing of sulfide minerals released sulfur that contaminated and acidified soils,” noted the American Geoscience Institute.

The tour mentioned above guides visitors past rock formations of a curious dark-black hue. As their materials explain, “Greater Sudbury’s rocks are not naturally black – rather, rock surfaces were stained black by early mining practices. Early smelter emissions contained sulphur dioxide and metal particulate. Sulphur dioxide mixed with atmospheric moisture to form acid rain that corroded the rock and produced a coating of silica gel, which in turn trapped metal particulate fallout to form a black coating,” more than three inches deep.

Much of the plant loss reported in the 1800s still remains today, and “there are still thousands of hectares of land without adequate plant cover. In these areas, continued land reclamation and restoration is needed to begin the long-term healing and recovery of the ecosystem.”

Now, there’s good news here, and I’m getting to that and I’m not trying to pick on Sudbury. Most other towns in North America can also talk of displaced natives and improper use of resources.

But Sudbury stands alone as an example in this sense: its entire reason for being was to rip local resources from the earth with absolutely no thought, care, plan or concern shown for the land, its foliage, its wildlife or its people. The land was literally stripped, blasted, sintered, burned, poured over with molten slag, acidified almost beyond redemption and utterly denuded of vegetation in the service of its logs and minerals.

It had earned the title my seatmate had given it by its sheer, wanton lust for wood and metals. It was, indeed, the armpit of the universe.

Yet, by the time of my advent, most of the damage had happened long before. Remediation was beginning. All I knew was that I was in an exceptionally dirty and denuded town in the middle of nowhere, that the coffee was hot, and the nickel was big. Heck, it was huge!

And Sudbury has been working hard on remediation ever since. So hard that it has won numerous awards, been honored with praise by such environmental luminaries as Jane Goodall, who noted that Sudbury proved, “that determination and persistence can heal habitats.”[5] It was one of twelve cities to receive the Local Government Honours Award at the 1992 Earth Summit for its greening efforts.

There are still 15 active mines in the area, and the challenges are legion. Yet, according to the American Geosciences Institute (AGI), greater Sudbury is now home to, “the largest, most successful environmental restoration program in the world.”

That may sound a bit ambitious but considering that, “when restoration efforts began in 1969, germinating seeds died on contact with contaminated soils,”[6] it doesn’t sound quite so far-fetched.

According to Joseph Casciaro, writing in Prezi.com, “it was 1972 when people became concerned with the destroyed land and horrible air to breathe.”  Ah hah! Three years later, when I passed through, there were already efforts at remediation underway. The mines themselves have made enormous strides to reduce dangerous emissions and remediate the landscape.

Three more years and the Regional Regreening Program was in effect. By the early 1990s, more than 2 million trees had been planted and some animals, birds and fish were coming back to the area.

Due to the acidic soil conditions that, as noted above, kept the land barren, Sudbury laid down a layer of alkaline dolomite mixed with grasses and small plants rather than trees. In a short time trees began to grow in these seeded areas and the process of reforestation was underway. This same process is continuing today.

Yet, as John H. Gunn notes in his 1995 master work on the area, Restoration and Recovery of an Industrial Region: Progress in Restoring the Smelter-Damaged Landscape near Sudbury, Canada,[7] the mainly birch forest stands that have resulted were far too small and isolated to support animal life other than insects. These trees were themselves far more open to infestation and disease from these same creatures.

Over the years since, however, the stands have filled out, pines and other trees have been planted or found their way naturally into the landscape. As of 2018 around ten million trees had been planted by more than 12,300 volunteers.

The topsoil liming continues in areas still deforested to allow the regreening process to begin in those areas as well. This soil is pre-seeded with a charming mixture of forest brush plants:

Fall rye, Canada wildrye, little bluestem, slender wheatgrass, and alsike clover are the precursors of the forests to come. Sudbury now has some of the cleanest air in the Province, according to CBC Radio, and reforestation is partially responsible. The Sudbury Regreening Program’s own 2018 Annual Report sums up the last four decades of restoration fairly well.

“Forty years of regreening effort has achieved remarkable results, transforming a barren, rocky landscape into a green and living one.”

There are still many thousands of hectares to be tended and restored, lakes and rivers to remediate. There may still be a history of native displacement to contemplate and diverse forests yet to fully regrow.

But at least we can say this: the next Greyhound stopping in Sudbury, taking a breath before crossing the great prairies, will do so in a shiny new bus station, in a town surrounded by trees. They will see the same huge nickel on its bright new base at the new Dynamic Earth Science center, presiding over a thriving city with breathable air, blooming wildflowers and budding new forests.

And the next cynical seatmate will have to find another moniker for Sudbury. There’s a long way to go but it is no longer, as it certainly once was, The Armpit of the Universe.