The Hudson and the Success of the Clean Water Act 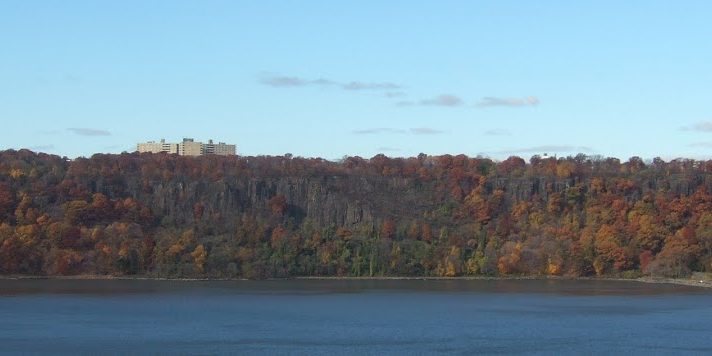 The New Jersey Palisades, magnificent cliffs along the lower Hudson river, in Autumn. In 1976, I stood about here and watched the Tall Ships tack up the river for the U.S. bicentennial celebration. Known as the Parade of Ships, 16 three- and-four-masted vessels sailed the river, returning to dock in New York Harbor at the tip of lower Manhattan.

Each time we drove down the Henry Hudson Parkway, approaching my sister’s home in northern Manhattan, I’d gaze across the vast sheet of the Hudson, sigh and say, “You know, this must have been so pristine and beautiful when the first settlers got here… ”

Glancing at the passenger seat, I’d see my wife desperately trying to stifle her laughter. “You say it every. Single. Time!” she would gasp. “I’ve just been sitting here waiting.”

Okay, very funny. But the truth is, it was still magnificent. The cliffs on the Jersey shore, known as The Palisades. The Great Grey George Washington Bridge, under which – if you look carefully – you can see the Little Red Lighthouse, of children’s-book fame.

A few miles south are the Plains of Weehawken, to which Aaron Burr and Alex Hamilton were separately rowed for pistol practice, and from which Hamilton returned mortally wounded. (By the way, that was no mean feat: the river is well over a mile across at that point.) There have been some changes since then – since the early days, I mean.

When Henry Hudson, for example, sailed up the Hudson in 1609, there were huge creatures swimming alongside him: sperm whales, humpbacks and other species of cetaceans. One sperm whale famously became entangled and died at Cohoes, NY, in 1652, supplying the town with a vast supply of spermaceti for whale oil.

But the those pesky ‘first settlers’ came, and the history of the river since then has not been a kind one: the European touch was not light, shall we say. Those who alleged, in the mid-20th, that ‘dillution is the solution to pollution’ were clearly not drinking from the Hudson. By the time I came along, the river was a sewer.

I was born in Tarrytown, which is ranged along the east bank of the Hudson near its widest point, some three miles across. This is the home of Sleepy Hollow and the Tappan Zee bridge. We lived in Ossining then, also on Hudson, and later in Riverdale, close to the wonderfully named Spuyten Duyvel (spitting devil) creek separating Manhattan from the Bronx.

Perhaps that’s why the wreck of the river – and the constant thought of what it must once have been like – was so personal, and so painful. The pollution of our waterways was a concerted attack from all sides and it was only legislation such as the Clean Water Act that stemmed the tide.

GE, for example, poured PCBs into its waters for 30 years, until their toxic effects were fully understood, and their use was banned. After 50 years of exposure, one species of fish, “evolved a two amino acid change in its AHR2 receptor gene.” Apparently this made it more likely to pass its PCB contaminants up the food chain through striped bass and beyond. Industry up and down the river added various chemicals, sewage and all the other trappings humanity seems to use but not dispose of safely.

There are major point-sources for waterway pollution and there are non-point-sources too. “…Sediments, nutrients, pesticides, fertilizers and animal wastes, account for more than half of the pollution in U.S. waters,” according to Wikipedia.

But hey, I didn’t come here to whine, not this time anyway. The story of the Hudson – and the Charles and the Great Lakes and many other American bodies of water – is a story of success.

My last post was about air pollution and how the Clean Air Act of 1970, along with the creation of the EPA that same year, had done wonders for America’s lungs. While researching all that, I couldn’t help but think of the impact the Clean Water Act of 1972, and the EPA’s designation of the Hudson as a superfund site, had on that wonderful river.

Fortunately, many other waterways have also been rescued, among them the Charles River in Boston. That’s good, because two of my wife’s siblings and my nephew capsized their canoe just past the Anderson bridge in Cambridge during Boston’s 4th of July celebration en route to the fireworks. They had to be rescued by a yacht heading in the same direction. (I was just about to dive in to save them when that boat pulled up. No, really I was, honest.)

Thirty years ago this would have been horrifying and I would have aborted the trip and taken them to the hospital. By 2011, when this occured, the Charles – while still not absolutely pristine – was swimmable again.

Some time in the summer of 1974 or ’75, I walked 20 miles along riverside trails beside Pete Seeger, on our way to Croton Point Park for his Hudson River Festival. We were raising money for the sloop Clearwater, Seeger’s co-op sailing vessel that plied the Hudson raising awareness about the plight of the river’s water, flora and fauna. I say ‘we’ but I was just a teenager helping raise a few bucks. Seeger, long-time champion of the Hudson, was walking behind the thousands of others, picking up trash they left behind, and I tagged along.

He was an old man, and I a young one, but he was spry and feisty and tall and had a wonderful resonant speaking voice, as I recall. Up close, he was as impressive as his reputation. The late great Harry Chapin was waiting at the park and entertained us all for a while.

A few years later I sailed on the Clearwater, taking my very young nephew – the same who took an unintentional dip in the Charles some years later – for his first sail. We both got an earful on the various states of the Hudson, dredging up crabs and shrimp along with the occasional piece of trash. He was born a few blocks from the George Washington Bridge, in an apartment my sister has occupied for almost 40 years. I guess the Hudson is pretty deep in my family’s bones.

But here’s the thing: the Hudson is back. The quality of water in the area is now higher than at any point in the last hundred years, according to the NYC Department of Environmental Protection. This in a river where fishing had to be banned in spots, along with eating anything that came out of it.

But there have been recent images of beaver in the Bronx and Hudson rivers, an animal that was hunted wiped out in New York before 1700 for its pelts.

Humpbacks have been spotted coasting upriver in the past few years. This is not a fluke – if you’ll pardon the pun – as some 272 were sighted in 2018. This was unthinkable just a short while ago and even as recently as 2011 only five were seen.

And that’s just the big boys. I, for one, was flabbergasted to learn there are seahorses in the lower river. Seahorses!

The lined seahorse is flourishing, and that means there are tiny shrimp for them to eat, and sea nymphs, and on and on. There are now bald eagles along the central and upper Hudson, and many more sharks than we’re accustomed to are hunting in the estuary. Move over striped bass, the big boys are atop the food chain here now — meaning the Great Whites. That’s likely a good omen, as sharks only go places to hunt and that means fish, and lots of ‘em. There are well over 200 species in the estuary including glass eels, Atlantic sturgeon, several species of catfish, and many others.

The lower Hudson, of course, is not truly a river anymore. Below Troy, New York, it’s a tidal estuary, and the brackish mix of salt and fresh makes for variety of animals and plants that would not be found if the water was fresh alone.

Now, we’re not out of the woods on this, and last year another estuary, the Chesapeake, was damaged by runoff of chemicals – specifically nitrogen and phosphorus – from heavy rains, along with debris, receiving only a D grade from the Chesapeake Bay Foundation (CBF).

The good news is, the Bay had been steadily improving for years. At the same time, it points up how easily all this work can be turned on its head. “The Bay’s sustained improvement was reversed in 2018, exposing just how fragile the recovery is,” Will Baker, the president of the CBF, told the Associated Press earlier this year, and the same is clearly true for the Hudson and others. This is not a ‘win’ where we can sit on our thumbs going forward.

But for the moment, let’s enjoy the fact that we’ve made huge strides and more is being done. It may not be just the way the first settlers saw it. But for all practical purposes, the Hudson is back!