The Once and Future Smog 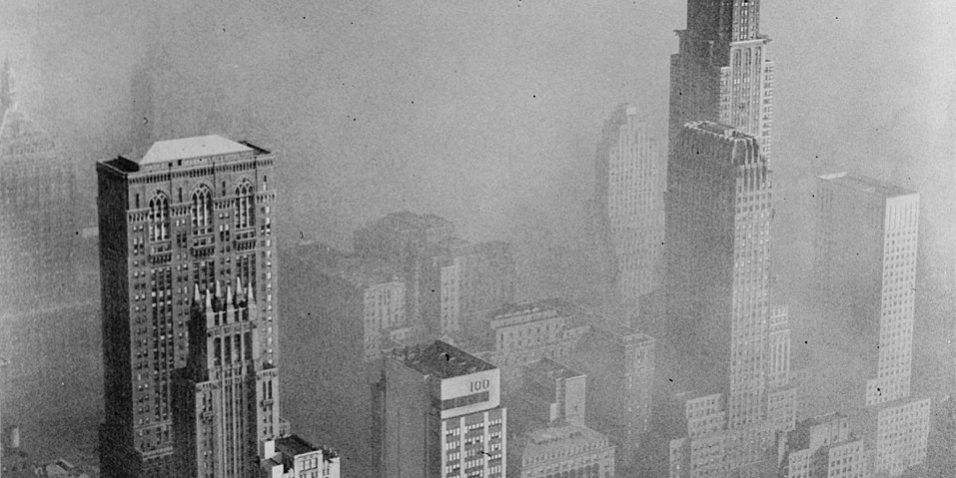 My wife just returned from a visit to Xiamen, China. Calling me from a tour bus, she remarked on Xiamen’s clean, fresh waterfront air. This reminded me of my own recent trip to the States, and the enjoyable breezes I inhaled in such places as Chicago, Detroit, New York, and Boston.

That was a far cry from my boyhood, when approaching any of those towns meant peering through a grimy brown smear. On an early foray to Los Angeles, I saw the thick, hazy rim hanging, stationary, above the great bowl between the mountains. And let’s not mention Gary, Indiana or Elizabeth, New Jersey, where rolling the car windows up was mandatory.

I remember when the air was so thick in New York that it was tough to see the Empire State Building from my place on 13th street, twenty blocks away. The same nasty stuff hung over Chicago’s skyline. So it was notable that I never gave the air a thought during my trip there this past September.

The air in my current town is a lot more like what I saw during my boyhood. It so happens that just as I flew to the U.S., there was a sudden upswing in air pollution, both here in Hồ Chí Minh City, and in Hanoi.

Since my return, the view from our windows here in Hồ Chí Minh includes a grey, dirty haze, limiting visibility and causing us to buy an air purifier just last week. My oldest daughter — the only one of us to spend the majority of our time in the outside air — has had a persistent cough for most of the past year.

It’s hard to explain the schools here, but hers is three floors of open-air classrooms ranged along open-air corridors in a rectangle around a large open-air courtyard, with flagstones and full-sized trees. By ‘open’ I mean that if it rains — which it does every day during the monsoon season — then it’s also raining in the courtyard and corridors. Whatever the outside air contains is what she breathes all day.

So what should we do? Well, it occurs to me that a snapshot of success in this area looks a lot like the Clean Air Act and the establishment of the EPA, in 1970. We’re just shy of 50 years on from those acts and consider that over this period, GDP has risen nearly 300% while emissions have dropped about 80%. Now that is an accomplishment.

It’s also a little alarming that, for the first time since those incredibly powerful pieces of legislation were passed, air quality in the United States is going in the wrong direction since 2016. The New York Times wrote this week that particulate is up ≈5.5%, enough to be responsible for just under 10,000 extra deaths over the past two years. Yikes!

Except that U.S. rates are now rising. More particulate is being pumped into the atmosphere from industry, autos, agriculture and, yes, climate-change-driven wildfires in the West. Having just written about the ravages of indoor air pollution (IAP) in R.O.I. last issue, it seemed air pollution particulate was now an issue for the developing world. Perhaps it’s too soon to make that call.

Under these circumstances, it is comforting that, according to the Washington Post, EPA Administrator Andrew Wheeler recently disbanded the expert academic panel that reviewed and advised the agency on its standards for small-particle air pollution and replaced it with fossil-fuel-industry consultants. What?!! Double Yikes!

Yet at least up to this point, the EPA, Clean Water act and the various Clean Air acts, have been spectacularly successful.

Still, if I was hoping Vietnam would follow the U.S. model, the news that AirVisual, an app that monitors air quality in cities around the world, took down its Facebook page, was disconcerting. AirVisual was also unavailable on the various App Store sites after Hanoi recently found itself at the top of their list for bad air pollution. The cause, they said, was a ‘coordinated attack,’ though they did not say by whom. If one were indiscreet, one could make a pretty solid guess, given that Hanoi is the capital. (Incidentally, the site is back up and Hanoi is now fourth on the list behind Belgrade, Delhi and Ulaanbaatar, Mongolia.)

As an American expat, it is gut-wrenching to find that my government is now in the habit of similar attacks on climate information. It is not shocking here to find that politically unwelcome facts are suppressed but when the EPA’s Climate Change Page went dark for more than a year, it became hideously clear the same was happening back home.

Happily, for those who haven’t checked in a while, I just did and the page content has reappeared.
Yet now we find that enforcement at the EPA is down, leading in part, to the uptick in emissions and, sad to say, to more disease and death.

Living here, where just breathing is deadly, is a stern reminder that going back to the days of smog in America’s big cities should be off the table. I can’t cross my fingers — that’s an inappropriate gesture here in Vietnam. But all the toes on my left foot are crossed that soon, Vietnam can replicate what the U.S. did fifty years ago and make its air breathable again. I’ve crossed the toes on my right just as tightly hoping the U.S. does not do the same in reverse.