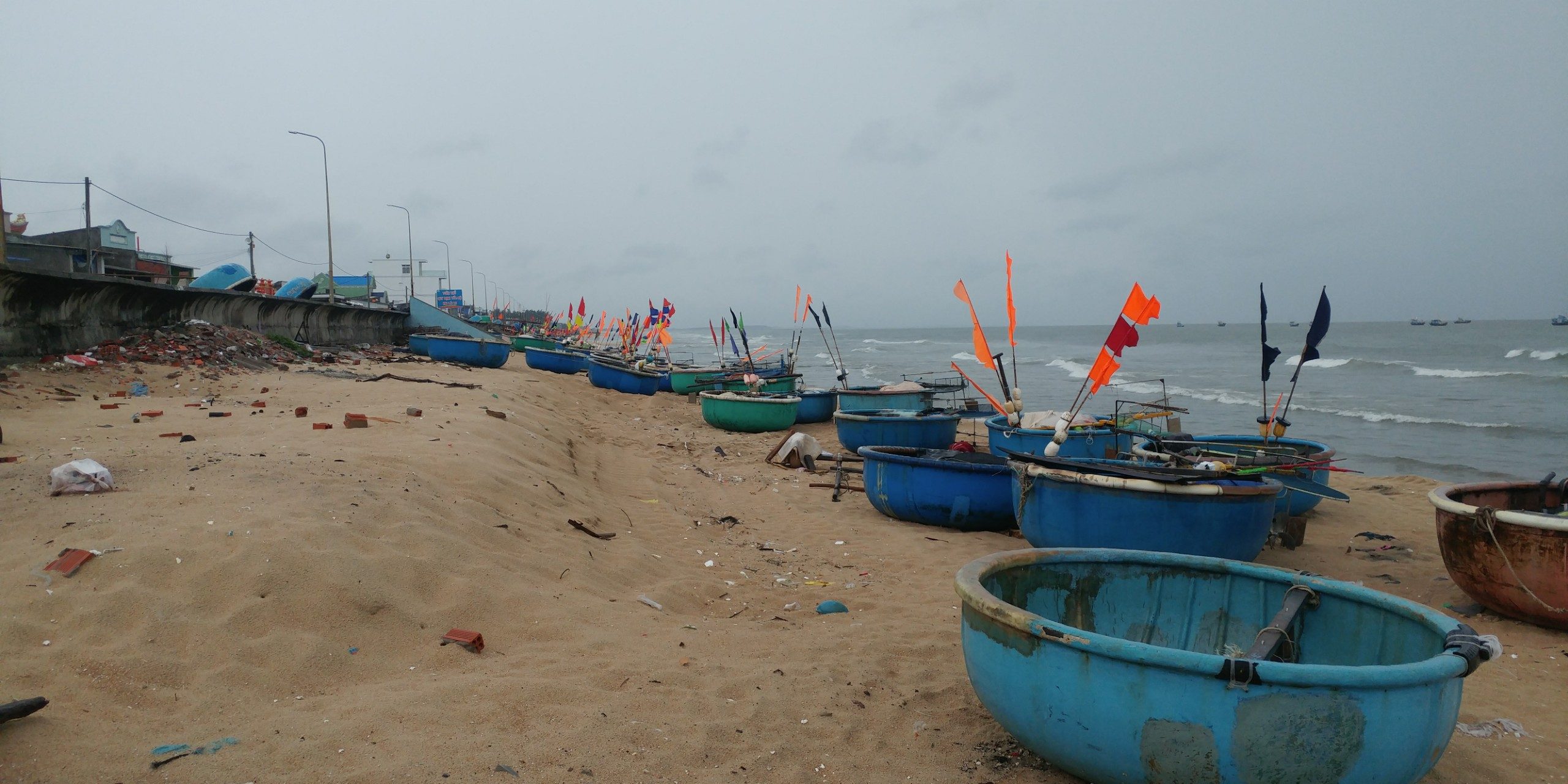 As a teenager, circa 1975 or so, I visited friends on Cape Cod just as moon and bay hosted the longest neap tide of the year. Launch your dinghy on the Brewster Flats, row frantically ‘til the receding tide overtakes you, and walk the tidepools on the endless sandbar another half mile to the clamming grounds. The basin’s sands are pristine and glistening.

Crabs and other scuttling creatures nip and run, the scent is the ineffable pungence of exposed and fermented sea bottom. Dig, dig, dig for an hour or two, then race back to the boat with your swag before the fast-returning tide overwhelms you. Haul up at last on warm sand decorated with shells and seaweed. What a great day!

The Vietnam War ended that year and, as time has passed in its steady fashion, I’ve circled away from those shores, having made a new life as an Expat American in Ho Chi Minh City, the former Saigon.

This weekend my own little family visited the local equivalent of Cape Cod, a town called Phước Hải near the peninsular shorefront city of Vũng Tàu.

On arriving, I eagerly took my 4-year-old hunting for shells among the fishing craft lining the beach. At the seawall steps, however, for the first time, I came face-to-face with a reality I’d only read about before.

Pictures and accounts had not adequately prepared me for what I saw.  Some hundred yards away the East Sea roiled uneasily at low tide. In between, another ocean—a tattered sea of plastic trash—lay washed up, blown, buried and fluttering in the sand at our feet.

Boats of unusual design—round tubs housing acres of nylon-mesh netting—were hauled up on the beach. They’re oddly picturesque, but all made of battered, blue plastic.

Originally, such boats were of plaited bamboo with bamboo oars and poles. Now the oars, the nets — once plant fiber — the fish boxes once of wood, and the lunch bags are all plastic too. It’s monsoon season and plastic’s the ideal material to keep things dry in an open dinghy.

Kailin, unperturbed by the shambles, kicked off her flip-flops and set out after shells. There are some truly unusual corkscrews here which I have not seen elsewhere, a sea snail my wife tells me.

It was a smorgasbord to Kailin, who was just as happy to pick up a brightly colored bottle cap as a mussel shell, but I was heartsick.

I have skinny dipped the post-hurricane rollers on a moonlit night off Montauk. Body surfed Santa Barbara’s swells. Braved frigid sands off Mount Desert Island. Spent a romantic week in a Bedouin hut on the dunes of Dahab along the Red Sea coast.

I’ve popped seaweed pods in the rocky estuaries of Vancouver Island, walked beneath the curls of Lake Michigan’s frozen waves, and trolled beaches up and down America’s east coast.

After dipping my toes in three oceans, pulping my shoulder in the surf at Jones’ Beach, and snorkeling off La Romana in the Dominican, I feel I’ve had a fairly good sampling of the world’s shorelines.

Never, ever, have I seen a nightmare such as this.

And here’s the thing. I can’t complain. Because I did this. We all did.

Forty years of retailing, stuffing millions of stenciled T-shirt bags with juice jars, milk jugs, toothbrushes, yogurt cups and thousands of other plastic disposable objects. I’ve wrapped fine cheeses in acres of plastic, swaddled pallets in layers of shrink wrap and sold water bottles by the hundreds of millions. I did this. We did this.

Later that day, with the rest of the family, I took to the waves and introduced Kailin and our new baby, Annika, to seawater for the first time.

It odd, knowing that everything strewn on the sand had come from this same sea, washed up in concentric ribbons by the tides, like ephemeral geologic strata—ephemeral, that is, except for the plastics, which will plague humanity for 50 generations.

In the morning Kailin and I walked the seawall, the breeze cool and salty. A deep-water fishing fleet, of unmistakable Asian design, lay bobbing low in the waters offshore.

To my surprise, I saw patches of green vegetation along the wall a few blocks down and went to investigate. Sure enough, it was a type of dune greenery festooned with delicate purple and white flowers but, as I approached, something wasn’t right. The white flowers weren’t flowers at all, but trash.

After the beach it was back to the house for a late-morning kip, the luxury of those on a weekend’s vacation, one I won’t soon forget.

Well, now you’ve met my family, and joined me on my first close encounter with ocean plastic at its ugliest.

I’m not out to make this blog a drag. As you’ve seen in our newsletter, there’s a ton to be hopeful about, a lot of brilliant, committed people sweating to keep us cozy in the comfortable envelope our earth provides. Expect more of that in here, for sure.

But even after Daniel came back from the Bermuda coast with tales of microplastics, high-level confabs, and a new website called www.PlasticStandard.com…even after all that, this was a shocker.

Just like Daniel, I’ve returned more committed than ever to fixing the problems we—me and a few billion others—created, and It seemed a fitting way to begin this blog.

I’m not the wonky expert Daniel is but I keep some smart company and ride herd on current events and innovations for Valutus. I will gladly share those, and anything else I learn, with you. Please join me on my own sustainability journey.

Thanks for reading. Your comments are very welcome.